On the plethora of commas in the writer’s works 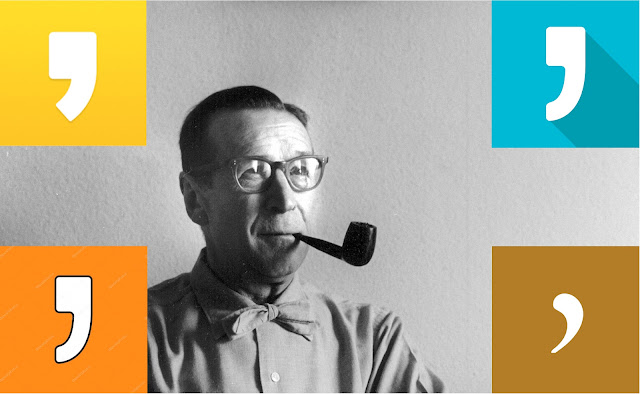 Pierre Assouline’s biography Simenon includes a 58-page chapter entitled Style, It’s Rhythm. The English translator condensed it to 17 pages. The reason was perhaps because it rambles through a hodge-podge of details about Simenon’s writing technique, from triggers, to titles, to themes, to xyz….
I choose to focus here on one particular aspect of Simenon’s style: his use of commas. Why? A critic of a book I once wrote complained that she “had never seen so many commas!” and ever since I’ve wondered if Simenon had influenced my style. Although the grammatical rules for comma usage are generally the same in French and English, commas appear much more frequently in French. Many have called Simenon to task for excessiveness in comma usage.
Assouline comments on the role of the comma in Simenon’s work this way: “Even if it meant looking crazy, he was capable of kicking up a fuss, if one modified it [his punctuation] without his knowledge, particularly if one went after his commas.” That commas would crop up often was suggested early on with the “rare on a book cover” comma that appeared in Monsieur Gallet, décédé. What is more, his contracts stipulated that “no one should change a word or a comma” in his texts. […] “The comma seemed to him to be a sentence’s indispensable breathing. It is the quintessential sign of its rhythm.” […] “A comma’s place in a sentence can change the sense. He cited the last line of Les Anneaux de Bicêtre as an example where a comma sets off a reference to Lina, the troubled wife of the protagonist. ‘One day he would go to see his father in Fécamp, with Lina.’ Without the comma, he explained, they are going to Fécamp naturally, and the story ends happily. With it, they are going there as well, but there is a problem and the story ends badly.” Even when Simenon stopped writing and switched to dictation for his works, he “specified the commas,” a practice that strongly emphasized his long-term belief: “For me, the comma is sacred.”
Here’s more from Georges on the subject of correction and punctuation: 1) In a 1960 letter to Doringe, his official copy editor of preference, he wrote, “You can very well, at the first reading, correct the errors in typing, spelling, duplications, but under the condition of not changing anything and above all not adding or removing commas because, correction or not, in the grammatical sense, I’m a maniac on this point.” (Note the commas!) 2) As late as 1982, he proclaimed, “I never accepted one changing even a single comma in one of my novels. Because I’m a fanatic about one thing, maybe I don’t have a highly refined style, but I am fanatic on commas. Because rhythm means very much more to me than beautiful sentences…  whenever a proofreader eliminates one of my commas as useless, I get totally enraged….” 3) In a 1964 recorded discussion about their writings, Ian Fleming, the creator of James Bond, stated: “I find I make stupid mistakes which they correct for me.” The creator of Jules Maigret countered: “My publisher has not the right to change a comma – not even to suggest to change a comma.”