SIMENON SIMENON. WORDS FROM HIS “LETTER TO MY MOTHER”/2 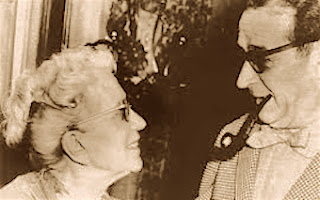 How did Georges actually feel about Henriette? The letter he wrote her after her death sheds light on the question. His “Dear Mom” salutation sounds promising, for he adds that “Mother” was the way he addressed her all the while she was alive. The extracted and translated positive comments here will inform:
On her attractive appearance: “You were pretty.” When dead, “You were beautiful. You were regal, majestic.”
On her niceness to her lodgers: ”With them, you kept on smiling and I wondered why.” Nevertheless, he credits her on how “For all, you had the same patience, the same good humor for all, above all for the poorest, you put off the time for you to go to bed in order to mend their socks.”
On her quality of not being a drinker: “You, you never drank, except one glass of light wine, one New Year’s Day at your sister’s house.”
On her admirable tenacity: “You were from another race. Furthermore, you were frightened by a fear that began practically at birth. And, with your somewhat vague, hard-to-define smile, you decided to fight it.” So, “You followed your life’s course with rare, if not the rarest, fidelity to your objectives. You succeeded. […] You got them all!” He expands: “Nothing daunted you. On the contrary, the more difficult the task, the more you grabbed on to it.”
On her goodness: “You had treasures of tenderness and patience in your heart.” And finally, “I understood that, all your life, you had been good […] not necessarily for others, but good for you, good to the substance of yourself. […] And this is why, Mother, you spent your life sacrificing yourself.”
On her later generosity: While visiting in Switzerland, “you handed me an envelope containing all the money I had sent you, month after month, for almost 50 years.” Also, “You had worked all your life to provide for your old age… [Yet] you brought us the fruit of your savings in gold.”  They were “small bags of gold coins with the names of my children on each one.”
On his good gestures towards her: “I felt a certain responsibility and used to send you a little money every month.” He adds, “I used to write to you, too.” Later in her life, “I didn’t want to let you leave [Switzerland].” But she did. “My desire was to set you up in a rest home.” But she refused. “I got [you] a very beautiful property not far from Liège [but] after a few days, you insisted on being taken back to your little house.”
On not blaming her: “You see, Mother, I have nothing to reproach you for and I don’t blame you for anything.” Thus: “I don’t hold a grudge against you.”
On earning his forgiveness: “I know now that there was never meaness on your part, I’d even say no egotism on your part. You were following your destiny […] and nothing, no sensitivity could get in the way.”
At the end of his letter, son Georges calls her “my dear little mom” and asks himself:
“How could I have bad feelings for you?”
Given the mix of negatives and positives, the surviving son seems conflicted.