On his decline and demise during the 80s 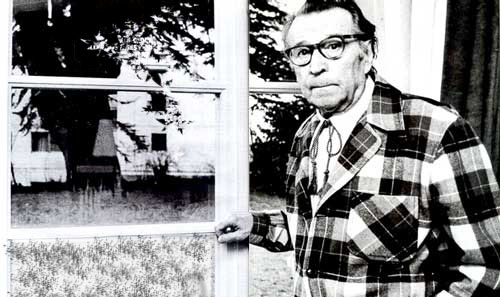 It was puzzling to find that biographer Pierre Assouline covered the last nine years of Simenon’s life in nine pages even though the interviews with his subject continued into the final year. An explanation may lie in the fact that, after Mari-Jo’s suicide, Simenon was “confronted with emptiness, the same as his characters” and his reaction was to “continue to shrink his living space.” Basically, there would be “no more games.” He stopped traveling about and hunkered down in his little pink house, so there wasn’t that much going on in his life to write about.
In any case, it seems he had reached a state where he “had nothing more to prove” and “nothing more to learn, nothing more to understand.” As he withdrew from the world, “all that remained was his obsession with time” in the sense that he “no longer tolerated the slightest unexpected thing” and he required “total, absolute, uncompromising order.”
Although Simenon would experience many difficult and complicating effects of aging, he still seemed to enjoy living. As he explained in a 1981 interview: “Old age is enriching. One retrieves sentences and images with extraordinary precision. And there are pleasures, even physical ones, that I savor more in old age….” For instance, reading was one of his “remaining favored activities.” As for subjects, medicine was “the dominant choice.” Psychiatry was “at the heart of this discipline” leaving other “passions” like anatomy and criminology far behind. Biographies, correspondences, memoirs, and journals occupied other shelves in his library. Notably, literature was “a bare minimum.” As he explained in a 1986 interview: “I never liked literature […] I never did it. I am not an intellectual.”
He also kept busy with matters related to Simenon Inc. because the business was flourishing during the 80s. Translations of his novels were available all over the world, but television shows and movies were now outselling his books. As a matter of fact, at the unveiling of the famous Maigret statute in Belgium, the photograph chosen to memorialize the event pictured the creator surrounded by actors, not publishers or editors. When not reading or working, he took walks or watched television.
Simenon’s social contact was minimal. According to Assouline, “he barely received anyone except family and close friends.” Although he did have Teresa right there in the pink house, his three sons were no longer living in Switzerland, Denise and Boule were both out of the picture, and although Georges and Tigy had remained “very good friends,” she was far off in France.
As Simenon’s physical ailments became progressively incapacitating in the latter part of the 80s, effectively grinding him down, Assouline reports—in a passage his English translator omits—that fortunately the man “could aspire to serenity. Everything that used to be a problem was settled: his mother, his wife, and his daughter. Three excessive and abusive women.
From there on, everything was in place.” Assouline indicates “Georges Simenon died as he had dreamed of it: old” and concludes that the subject of his remarkable biography was “finally at peace.”