From pulp fiction to semi-serious literature 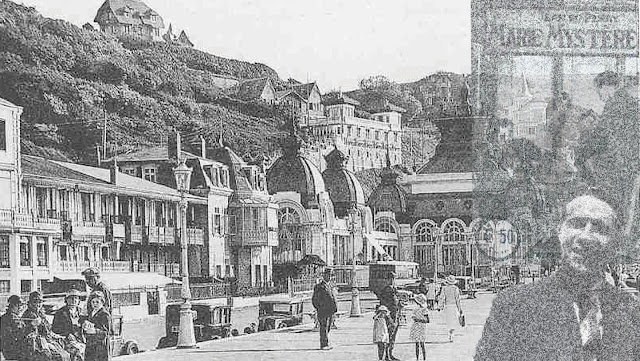 Prior to his creation of Maigret and the decision to publish under his own name, Simenon wrote over 190 pulp fiction stories under seventeen different pseudonyms. These romans populaires tended to follow a strict formula according to their prospective readership: either mildly sexually suggestive accounts, adventure stories or romances; the settings were generally exotic locations or the hotels and homes of the wealthy. By the end of the 1920s, the author was considering his next step, a move from pulp fiction to what he described as semi-serious literature, a period of reflection that coincided with his writing of three texts in which Fécamp provides the central setting of one long short-story and the point of departure for two novels.
Marie-Mystère, written in Paris at an unknown date, appeared under the pseudonym Jean Du Perry in 1931 as Simenon fulfilled his contractual engagement for romans populaires, one of the conditions laid down by the publisher Fayard for agreeing to launch the Maigret series. In 1908, a woman whose identity remains a mystery dies in childbirth in Fécamp. Her daughter, baptised Marie-Madeleine, is raised by the Dorchains, a poor fishing family. The remainder of the story unfolds in Paris and revolves around the revelation of Marie-Madeleine’s true identity and a complicated plot involving an attempt to entrap her into marriage in order to cheat her of an inheritance, breaking the heart of Henry, the youngest of the Dorchain family, who has fallen in love with his adopted sister.
The plot of L’Homme à la cigarette, written in Paris in the winter of either 1928-1929 or 1930-1931 and published under the name of Georges Sim in 1931, is equally convoluted. The eponymous hero is J.K. Charles, an agent of the secret services whose cigarette, permanently dangling from his mouth, is in fact filled with an explosive charge. A wealthy American is found assassinated in Paris and suspicion falls on a Fécamp deckhand, Petit Louis, who is at sea. On Louis’s return to port, he mysteriously disappears before the police can arrest him. The remainder of the novel is set away from Fécamp and only at the end does the reader learn the truth about the murder and the man with the cigarette’s role in and motivation for the disappearance of the sailor.
Although it first appeared under Simenon’s own name in 1933 in the magazine Marianne, ‘L’énigme de la Marie-Galante’ belongs more properly to Simenon’s pre-Maigret writings, having been written in June 1930 at Morsang-sur-Seine and featuring the private detective G.7 who had been the central character of the short story series Les Treize énigmes published under the nom de plume Georges Sim in Détective magazine in 1928 before reappearing under the author’s real name in 1932. The Marie-Galante, a 30-metre vessel which has been immobilised for three years, is found abandoned off the coast of Fécamp although no one has seen it leave the port. The situation becomes even more mysterious when the recently murdered corpse of a woman is discovered in a welded water tank on the boat.
Simenon’s pre-Maigret Fécamp narratives prefigure some of the key themes that will become central to his mature writing. Maigret’s affection for les petites gens, the “little people”, is well known and the narrator of Marie-Mystère shows a similar attitude, hinting at a social conscience which is largely absent from the earlier romans populaires when he comments that ‘The Fécamp fishermen, as elsewhere, earn just enough to feed themselves and their families. And the days when they are confined to port, they earn nothing.’ However, just as the petites gens who Maigret encounters are treated sympathetically, there is an unspoken sense that each social class occupies its position as part of a broadly natural order.
Along with this mixture of sympathy and condescension towards the popular classes, the early Fécamp stories also suggest that the apparent respectability of the bourgeoisie may hide a darker immorality. In ‘L’énigme de la Marie-Galante’, the shipowner's home is characterised as ‘bourgeois […] not in the usual […] comforting sense of the word, but in its most sinister sense… Airless, lightless rooms’, the description of the house serving as a metaphor for the class to which its owner belongs.
As well as beginning to develop certain themes of his later work, the early Fécamp texts also bear witness to the development of Simenon’s literary techniques in particular his use of multisensory touches, often appealing to the reader’s sense of smell and taste as much as vision, to create the atmosphere of a location: "No more varnished yachts. No more brightly coloured hulls or elegant sails. Heavy iron ships spitting out black smoke and belching forth barrels whose smell hits you as soon as you disembark at the station. […] Wagons circulate on the quaysides and are filled with salted cod leaving a disgusting after-taste in your throat. The rain! The mud!" (L’Homme à la cigarette).
Simenon’s move from the usually opulent or exotic settings of his earlier popular fiction, typical of the escapist literature of the 1920s, to the everyday world of Fécamp’s fishing industry, along with an increasing social awareness, were important steps in his literary development. Georges Sim, Jean Du Perry and the other pseudonyms under which the author worked did not become the fully-formed Georges Simenon overnight, but a careful reading of the early Fécamp narratives confirms that he was moving in the right direction.