SIMENON SIMENON. IT WAS IN FEBRUARY 1931…

How Maigret met Simenon at the Anthropometric Ball 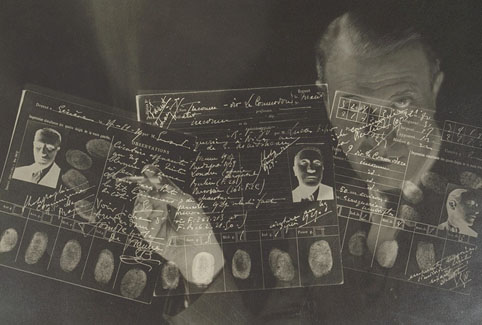 During the night of February 20 to 21, 1931 Simenon celebrated the release of his first two Maigret novels by Fayard. Today we propose to you this little short story, which was published in Italian on this blog six years ago. We slightly rearranged it, and we hope you'll enjoy it…

When Maigret had received the card, he first had shrugged, then he had been about to throw it away. But he had felt a kind of curiosity, so he had slipped it under a pile of files. He had pretended he had forgotten it, and it was only on Friday afternoon that the small piece of cardboard had resurfaced.
The Chief Inspector signed the last report of the pile, and when he removed it, the card fell on the carpet. Maigret picked it up and reread the note: "Georges Simenon has the honour to invite you to the Anthropometric Ball, which will take place at the Boule Blanche, 32 rue Vavin, on Friday, February 20 at midnight."
He almost threw the card into the wastebasket, but he didn't do it, and he furiously sent the card in a drawer, where there was a pipe with its stem broken. This put him in a bad mood. For the rest of the afternoon he sat grumpily at his desk, and Lapointe, who had come to talk with him about the latest case, retreated without insisting.
At six Maigret left the Quai des Orfèvres, walked along the embankment before taking the bus that stopped a few meters from his apartment. The door opened before he had time to take his key out of his pocket, and he kissed his wife on the cheek. There was a good smell of fricandeau that was pervading the kitchen and the dining-room, but this didn't soothe him much. Mme Maigret well saw that he looked upset, but she took care not to say anything, and said they could sit down to eat.
Maigret ate absentmindedly, without realizing he was swallowing a tasty lemon cream, and his wife just sighed when clearing the table, while the Chief Inspector was sitting down in his armchair and filling his pipe. He hadn't spoken a word during the whole meal.
When she had finished washing the dishes, Mme Maigret sat near the stove and began to knit; from to time to time she glanced at her husband, who was turning the pages of the newspaper without seeming to understand what he was reading. Mme Maigret dared to ask him:
- Do you want me to switch on the TV? There's a western movie on the second channel.
Maigret didn’t answer immediately. He stood up, planted himself in front of the window, through which he could see the garland of streetlights, then, after a while, he turned around and grumbled:
- I'm going out tonight. Don’t wait for me; no doubt I'll be out for much of the night.
- A new case? she asked.
- No.
The answer had been categorical, and somewhat exasperated. Mme Maigret didn't insist and she only said:
- Do you want me to prepare your grey suit?
- No. I'll go as I am. No need to do too much for this stupid story…
He opened the sideboard, swallowed a small glass of raspberry from Alsace, put on his hat and overcoat, and went out, slamming the door. Mme Maigret sighed, and went on with her knitting. The sweet pink onesie was lengthening in her lap…
**************
It was really bitter cold. Maigret pulled up the collar of his overcoat. To go to the Left Bank, he had taken the metro, which had kept him in his bad mood. Number 32 on Rue Vavin was just a stone's throw from the metro station. It was barely nine o'clock, and at the entrance of the cabaret, there was nobody, except a delivery boy who was bringing petits fours and cases of champagne.
Maigret headed towards Boulevard Montparnasse, entered the Coupole, where he settled in the American bar. For an hour and a half, the Chief Inspector sipped his beer, ordered a second one, and stayed still, watching the customers in the mirror.
Finally, around ten thirty he stood up as if it required a great effort, threw change on the counter and went out. In front of 32 Rue Vavin, taxis were dropping ladies with pearl necklaces and gentlemen with big handlebar moustaches. People were shouting out gaily, and the queue was lengthening on the sidewalk. You could hear the first chords of a muted trumpet.
Standing in the middle of the street, Maigret waited for a long time. Finally around midnight he decided to enter the Boule Blanche, and he had to jostle to make his way through the crowd that was dancing, drinking and laughing. He reached the back of the room, climbed up to the gallery, and got closer to a table where a young man with a striped jacket, slicked back hair, pipe in his mouth, was casually signing a pile of books. On the black and white covers Maigret could read some words: "Pholien" and "Gallet". He was about to turn back when a voice stopped him:
- Hello, Chief Inspector. Well, what do you think about all this? Big success, isn't 'it?
Maigret grumbled vague sounds. The young man went on:
- So, come on, have a drink to celebrate.
Maigret followed him, and they went down the stairs. Simenon headed towards the bar, patting the buttocks of some dancing girls, who were laughing and showing their white teeth sparkling on their cinnamon-coloured face.
- Chief Inspector, what would you say about a little "special Boule Blanche" cocktail?
Maigret didn't even try to refuse, and without knowing how he soon found himself dragged into the crazy pace of this night. At five o'clock in the morning, both men were confiding:
- So, you see, old Jules… Do you mind if I call you Jules? ...
- Little Georges boy, you still have many things to learn about… As for me…
At seven o'clock, when the last revellers left Rue Vavin, Maigret decided to go directly to his office without going back home. His wife never asked where he had spent the night, and she didn't talk either about the small torn pieces of cardboard she had found in the bottom of his overcoat pocket…