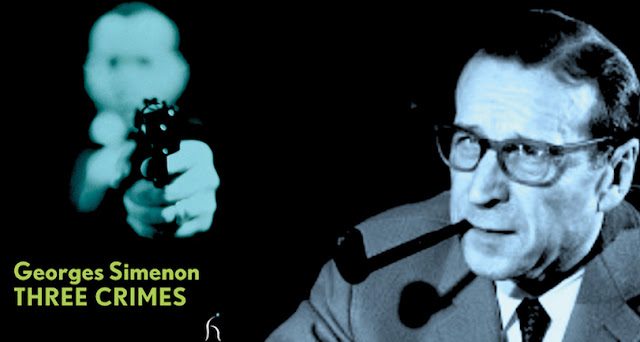 This novel intends to present “three crimes” committed by Simenon’s “friends” for retrospective examination. However, in defining one crime as a “triple crime” and equivocating about “five or six deaths,” the author undermines the expectation of a straightforward account. By the end, to my count, he has paraded out more than three ‘major’ crimes, multiple ‘minor’ crimes, four murders with a possible fifth, and at least seven ‘criminals.’ Here is the gamut of the crimes and criminals:
Before Danse murders, his ‘minor’ crimes include multiple pedophiliac assaults on prepubescent girls, blackmailing, and pimping. His ‘major’ crimes, specifically three murders, are violent and extravagant in contrast. First, he kills his mistress, not just because she has taken up with another lover, but also because “she decided to leave him.” Then, “afraid to remain alone,” he wakes his mother and, without explanation, kills her, too. When later accused, he acknowledges he “did the same thing” he had seen at the age of four: he beat their heads with a hammer and stabbed their necks with a knife. Then, he quickly proceeds to kill an elderly priest who “had made him suffer” in school, shooting him “point blank with all the bullets in his cylinder.” His motivation and goal is “to replace the scaffold [in France] with a prison [in Belgium].” If it was not clear before, it is now apparent Danse is insane.
Before Deblauwe murders, his ‘minor’ crimes are conning, blackmailing, and pimping. When another man steals “his woman” and, more importantly, his “bread winner,” he tracks her down, kills her accompanying lover (his ‘major’ crime), and “escapes to prison” by committing a “petty infraction.” Eventually identified and tried, he gets ‘just’ 20 years of hard labor and 20 years of banishment, escaping the death penalty primarily because his runaway mistress testifies in his favor, praising him as “the most charming man who could exist.”
Fakir swindles, plies young people with intoxicants, and deals drugs before committing his ‘major’ crime: spiriting away a vulnerable lost soul, drugging him into addiction, and driving him to his death. “Little K” is found, dead, hanging by his neck, after an evening of partying with Georges among others. If self-executed, his death probably was a crime in Belgium at that time. If not ‘illegal’, it was at least a ‘moral’ crime. Actually, he may have been hanged. Potential perpetrators include Fakir, an anonymous someone else, or even Georges—who later on poses this disturbing question: “Didn’t we kill little K?”
“The Two Brothers” are essentially bit players who commit multiple crimes but do not kill. Their worst crime does qualify as a ‘major’ one since they repeatedly rob and beat their own mother. Ironically, may be even fortunately, she “took the precaution to die” before they “murdered her.”
Thus, in this work about three crimes and his friends, Simenon actually describes and examines a great many “crimes” and “friends.” Even if this “true” tale does not provide the understanding of criminals hoped for, it is interesting, disturbing, and challenging read.