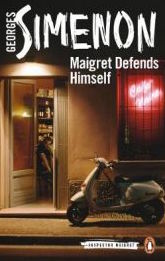 In a unique juxtaposition, Simenon produced two closely connected Maigrets in sequence, and Penguin has recently released modern English translations of both works (Maigret Defends Himself & Maigret’s Patience) a month apart. Familiarity with two central characters, Manuel Palmari and Aline Bauche, as they appear in the prequel novel, will prepare the reader nicely for the eventual irony in the sequel. Here are portraits of the two people Chief Inspector Maigret turns to for aid in his defense against accusations of drugging and assaulting a teenage woman:


Individually, Manuel is an older man, approaching his sixties, with a look “of a certain dignity” and “the character” of “a born comedian, who liked to make jokes as much about himself as others.” Maigret has known this shifty criminal but helpful informer well from his young inspector days on, and they are “on very good terms.” The resourceful crook began as “a young pimp” but “wasted no time” in turning “a seedy bar” frequented by “lowlifes” into “an expensive restaurant” patronized by owners of “big American cars.” Ultimately gunned down in a settling of accounts, confined to a wheelchair and effectively to his apartment, Manuel lives “like a mouse in his hole.” He alleges he is now clean, but Maigret strongly suspects—short of any proof—he is still the mastermind behind a 20-year string of jewel robberies, a case the Chief Inspector has been unable to solve. Now, Manuel seems to truly want to help “my friend” Maigret in his defensive effort.
Individually, Aline is a much younger woman, a mere 22-year-old, but “a character” as 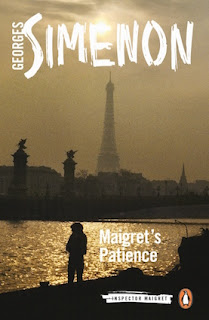 well. She was a 16-year-old streetwalker Manuel had “picked up off the sidewalk” and made a waitress in his restaurant and his mistress in his home. Now, she “plays the little lady,” neatly coiffed and dressed “with discrete coyness.” Maigret readily senses her “strong desire for respectability” and her hope to be regarded as “a refined wife.” Always “suspicious” of Maigret, she routinely gives him a rough time, but despite her overt defiance, he discerns her “uncommon faculty for intuition” and adds “respectfully” that she is “a female in the full sense of the word.”
When viewed as a couple through Maigret’s eyes, “they appear to be truly in love with one another.” Calling each other “Papa” and “My Little One,” bantering and joking, they seem a great pair: mutually attentive, communicative, and supportive. Aline gets Manuel in and out of bed, bathes and dresses him, runs the errands and supervises the business. She is apparently his only contact with the outside world. In turn, Manuel defends and protects her fiercely. Manuel alternates complimenting Aline with reproaching Maigret for his curt, demanding manner towards her. During his first visit, although they both tease and taunt him, Maigret senses they are “rather concerned” about him. In fact, during his second visit, with Manuel’s encouragement, Aline provides substantial information and insights, greatly assisting Maigret in his defensive steps. As the reader will have guessed, Maigret proceeds from here and is completely successful.
Despite the help from the former prostitute and the gang boss, for which the Chief Inspector is grateful, Simenon ends this prequel novel by predicting the future: “one would still see him frequently” tracking them both “to subsequently prove Manuel was the man who pulled the strings controlling the jewel thieves.” Curiously, the author waited eight months to write the promised sequel.