SIMENON SIMENON. THE WRITER PRESENTS SOME DRAMATIC CHANGES IN TWO OF HIS CHARACTERS 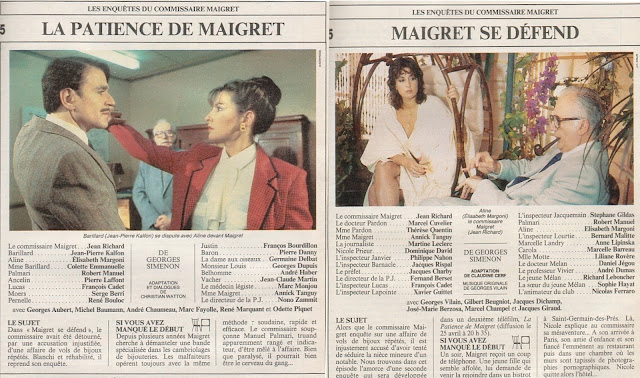 In the second of these two closely linked Maigret novels, both recently released by Penguin in new English translations, two central characters evolve dramatically as the Chief Inspector resumes what his colleagues refer to as “Maigret’s Longest Investigation.” Manuel Palmari, his long-term ‘friend’ but his prime suspect in a 20-year string of jewel robberies, gets murdered and Aline Bauche, Manuel’s long-term companion but Maigret’s antagonist, offers no help in exploring the whys and wherefores.
The two people who now challenge Maigret’s patience in the second novel had seemed to be a good match in the first novel. Manuel loved Aline “most passionately and most tenderly,” and “she became his life.’ In turn, Aline was “tender” toward her “boss,” cared for all his needs “like a child,” and “defended him like a tigress.” As an observer, Maigret developed “feelings of fondness” and “soft spots” of “weakness” for them both. However, as the second story unfolds, an unsuspected dichotomy comes to light, driving Maigret’s feelings about them in completely opposite directions. He becomes more affectionate toward departed Manuel and more annoyed with surviving Aline.
Maigret considered Manuel “a wild beast with long fangs” when they first met. Yet, despite their “little war” over the jewel heists, things changed so that “their encounters could have passed for those of two old friends.” By the time of Manuel’s death, Maigret views the “smart guy” as “a tough but tender man.” Afterwards, Maigret experiences “if not sorrow, at least a particular nostalgia deep down” and feels “a kind of admiration” for him. “Although they were on different sides of the fence,” Maigret now appreciates the “subtle bonds, difficult to define, that built up between the two men.”  Even if  “the word respect was too strong,” Maigret “could not help having a certain esteem for him.” And thus, his affection for Manuel grows.
It goes the opposite way with Aline. In the beginning, she had “exerted a kind of fascination on him” and he felt “much sympathy and even a certain admiration” for her. Yet, after the murder, her behavior rapidly erodes this sort of thinking. There is “such hatred: and “such defiance” in her look that Maigret “expected to see her rush forward with her claws out.” She is so “disdainful” and “resentful” and “aggressive” while they are “at war” that Maigret comes to doubt what he used to believe about her relationship with Manuel, specifically that “As far as I could tell she loved him.” Indeed, it was “as if [her] true nature was coming to the surface,” for Aline changes both emotionally and physically. “The Chief Inspector witnesses a kind of collapse,” such that she “scarcely resembles” the Aline he “had known for a natural beauty that made her exciting.” Hair undone, no makeup, badly dressed, she needs a bath. “All that remains is a kind of tracked animal, withdrawn, afraid, worrying about her fate.”
As Aline degenerates, Maigret’s suspicion and annoyance increase. “At times she behaves like a child,” and he “wants to slap” her. He actually comes very close “to striking her face with his hand, if not his fist.” More importantly, as his anger accumulates, so does the evidence, ultimately allowing him to bring those he suspects of Manuel’s murder together. In a final confrontation scene, Aline the tigress does, in fact, scratch her newly discovered lover’s face. Not only does Maigret succeed in solving the robberies and the murder, but he also gets the spin-off satisfaction of learning fundamental truths about his elusive ‘friend’ and the grieving ‘widow.’