Some information about the periods when Maigrets were published or not. 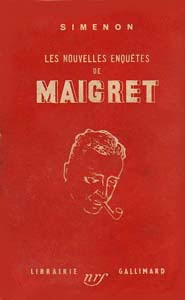 During the 1930s, personality and behavior issues aside, Simenon struggled within the literary world regarding his writings. Some literati, including publishers, editors, critics and writers, did not like it. The reading public, however, had been buying his Maigrets, so the apparent disappearance of Chief Inspector Maigret in 1934 was curious. Exactly why did he ditch that good source of funds? In the biography Simenon, Assouline explains that Simenon “wanted to go beyond his hero… To climb up another step in the order of literary recognition. To finally throw himself into a search for something else without a safety net…” Thus, Simenon had informed Anthème Fayard: “It’s finished, I’m stopping… I think I can write a real novel…”
That many wanted to see Simenon’s “great novel” was a big influence, and although he seemed to be still focused on developing as a more literary writer, perhaps he did, too. In any case, his most promising attempt seemed to be Le Testament Donadieu (The Shadow Falls and Donadieu’s Will) in 1937. Much longer than the usual Simenon output, this “family chronicle” received mixed reviews, many finding it “unclassifiable.” Presumably disappointed in its reception, Simenon dubbed it his “first novel” with the qualification being it was the first to be “completely literary.” Suffice it to say, it was not his “great novel.”
After the publication of his 19th Maigret in 1934, Simenon had given the impression he had closed the door on detective novels. According to Assouline, the author “did not miss a chance to declare Chief Inspector Maigret had been permanently retired,” but this was not the case at all. In fact, eight Maigrets appeared two years later in 1936, another one in 1937, eight more in 1938, and two in 1939. Simenon’s rationalization? They were only short stories in daily newspapers and weekly magazines and not novels.
Unsurprisingly, Gallimard was right there ready to facilitate Chief Inspector Maigret’s reappearance when, in 1939, Simenon started finding himself “tormented by an old demon: to take back Maigret.” Both men saw how they could “draw profit from a new undertaking” and Simenon did “need money.” The ‘reincarnation problem’ of how to ”exhume” Maigret without too much “damage” to the literary career Simenon hoped for was handled as follows: they published three novels in a compendium, appropriately titled Maigret revient (Maigret Returns), in 1942. Next, they published another novel as well as the earlier short stories in a collection, appropriately Les nouvelles enquêtes de Maigret (Maigret’s New Investigations), in 1944. Then, after another two-year gap, regular Maigret publication resumed in 1947 and continued on a yearly basis, reaching a total production of 103 works by the end of 1972. When on February 17, 1973, Paris-Match quoted Simenon: “It’s over, I’m killing Maigret,” the series did, in fact, end once and for all.
This convoluted chronological history at least does away with the perception that Maigret disappeared for a full eight years during the 30s. Essentially, the few interruptions in Simenon’s lengthy series were merely Maigret’s short vacations.