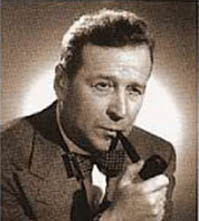 About halfway through Pierre Assouline’s Simenon, one runs smack into some ambiguity* about Simenon’s role as a collaborator with the Germans during the WWII period. Back in 1933, in the newspaper Voilà, the young reporter had written: “I saw him, the Messiah….” However, given that he wanted to “stay a Belgian above all else,” and had “refused the great [French] naturalization proposed to him” in 1935, it seems unlikely he would  later on have sided up to another country.
Assouline approaches the question with a political portrait: “He had always been, was, and would remain viscerally a man of the right.” However, as a “populist and conservative rather than reactionary, he was not short on contradictions.” First describing a man who “could not get along without order,” one who “detested change and did not stop praising immobility,” Assouline then characterizes him as “a fundamentally unstable person.”
Now, for some differing behavior: 1) After the war was over, Simenon would claim “he never missed an opportunity to remind of his refusal to let his novels be translated and published in Germany from Hitler’s coming into power until the end of the war.” However, Assouline contends “the reality was otherwise,” pointing out that “in fact, during 1938 and 1939, Simenon was quite willing to sell the rights to his books and articles to papers and publishers beyond the Rhine.” That this did not end up happening “was not for moral or political reasons,” rather it was because publishing “the entirety of [my] work” was what was important to Simenon.
2) In contrast, when the war began, Simenon went a different way. The declaration of war by Britain and France in response to Hitler’s invasion of Poland on September 3, 1939 “stunned” Simenon. For starters, his personal response was to retreat to his writing. “What to do? Write.” But, while he was basking in his son Marc’s infancy, Simenon was also worrying about being called back into military service by Belgium. Although he did not “intend to volunteer,” he ended up serving Belgium―and France―quite well!
A foreigner and not a citizen, Simenon was restricted in movement within France, most importantly from the coast where he wrote to inland Paris where he could peddle his work. However, shortly after the May 1940 German invasion of Belgium, he did go to its Paris embassy and wound up as a “High Commissioner” responsible for welcoming the “flood of Belgian refugees” into La Rochelle and handling their affairs. “For the first time in his adult life, he was going to put himself into the service of others.” In fact, Simenon worked long and hard at the reception center he set up, often sleeping there instead of going home. Notably, the author “wasn’t writing anymore,” for “his preoccupation was before anything else humanitarian.” Indeed, “for 18,000 Belgians, he was not the famous novelist, but the man they called upon [for help].” By August, however, when the refugees were able to go back home, “his mission was completed” and “he could return to his writing.”
After such conflicting behavior up to this point, will a collaborator emerge or not?
David P Simmons
* The preface to Bill Alder’s Maigret, Simenon and France: Social Dimensions of the Novels and Stories states, “Some thought Simenon was a collaborator, and he spent a number of years in the United States as an indirect result. Reflection suggests that a man of such strong feelings about human justice is very unlikely to have been a collaborator.”