Are these detectives and writers similar or different? 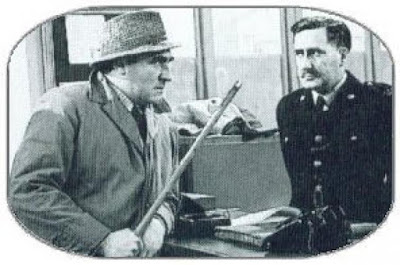 Detective Caleb Cluff and author Gil North invite comparisons with Jules Maigret and Georges Simenon respectively. Geoffrey Horne (1916-1988) wrote eleven novels featuring Cluff from 1960 to 1972 under the pen name of Gil North. In turn, Cluff, the popular BBC television series of 20 episodes written by North, ran during the mid-sixties. This year, the centennial of the author’s birth, the British Library has rereleased his first two books, and the very first one, Sergeant Cluff Stands Firm, provides a good tool for comparing the detectives and the authors.
While much closer to Simenon’s roman durs than his Maigrets, this novel is less dark, develops more tension, and contains more action. The story begins like a typical Maigret investigation, but gradually (and cleverly) escalates from a whodunit mystery into a thriller and spirals on into a tornadic melodrama.
When a woman is gassed to death, everyone concludes it was suicide except Caleb Cluff. Stubborn and defiant, he takes himself off the case officially to pursue his chosen suspect, her missing husband, and proceeds to hound him and eventually some unforeseen partners into desperation. “Sergeant Cluff, if he was not around the first corner, must always be waiting round the second. They could not avoid each other.” Cluff provokes two more deaths and several more close calls, including his own, before he succeeds in rounding up the culprits.
Comparing writing style, this North is similar but not identical to a Simenon: it is short (156 pages). The prose is clear and concise, but the technique is staccato and fragments are commonplace. Dialogue abounds, but it is much more clipped. North shuns verbs the way Simenon shuns adverbs. The adjectives are familiar (rainy, wet, soggy, dingy, dirty, muddy, and dark into black…), but often repeated. The descriptions are striking, but the (15) emphatic depictions of breasts stand out as overkill. “The nipples of her breasts were sharp and stiff and pointed.”
As for Sergeant Cluff and Chief Inspector Maigret, they are birds of a feather, but not identical twins: Cluff is big, even fat. “His bed was big, to accommodate his bigness. The counterpane rose in a hill over his large belly.” Cluff smokes a pipe. Cluff drinks a few pints and some brandy, but not as much or as often as Maigret. Cluff doesn’t like his boss “with a permanently hostile manner” either, but he is more inclined to go his own way. Caleb’s primary supporter is his dog whereas Jules has his wife. Cluff is taciturn. “He was a simple man, elemental,” but he is a lot ruder. Cluff is gruff and grim. “He was grim as the country was grim.” Cluff is equally stubborn and dogged. “Cluff was advancing at exactly the same pace, presenting exactly the same appearance.” Observation and intuition are Cluff’s primary tools. “He thinks with his heart,” very much like Maigret without the trances. Cluff shows compassion for the victims. “He could feel as well as see,” but unlike Maigret, he seeks vengeance on the guilty and judges them severely. “What are you―judge or detective?”
In summary, Cluff and Maigret as well as North and Simenon present similar exteriors, but underneath they….