On Gide’s important role in Simenon’s life and career 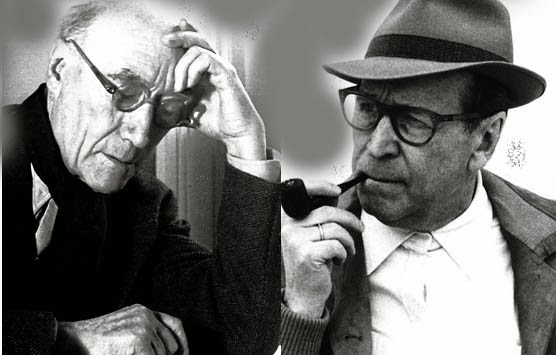 The author André Gide had major, direct influence on Georges Simenon from 1935 to 1951. According to Pierre Assouline, he “played a significant role” in Simenon’s “short- and medium-term evolution.” Indeed, in the 12 pages of the Index of Names Cited at the end of the 900-page biography Simenon, Gaston Gallimard is the only person with more listed page numbers than André Gide.
In 1935, because the 66-year old Gide wanted to meet the 32-year old Simenon, Gallimard arranged their introduction at one of his annual cocktail parties. Although he “had read but little Simenon,” Gide then “bombarded him for one hour with questions” of a “very literary” nature demanding the sort of “introspection” into his writing that Simenon specifically hated.
After this abrupt and aggressive beginning, Gide “was not going to stop reading, sampling, and commenting on Simenon.” As a warm and enthusiastic Gide gave feedback on Simenon’s works extensively and, in turn, Simenon “solicited his advice more and more often,” a lasting relationship developed. “From the first meeting” on, Simenon had someone who “helped him embark on his career and find his way” because Gide “stayed right beside him, dispensing criticisms and encouragements.” Though they were often apart and had to rely on letter writing, advice, opinion, and direction were what Simenon came to expect of Gide.
By 1940, Simenon suggested he needed “the whip” or “the club” of “a Gide” to continue publishing. Having the “indispensable friendship of Gide” and “an admirer with the importance of Gide” likely facilitated his boast: “Great minds say there are two great writers in this country: Gide and me.” Perhaps as well, this quasi-mutual admiration society explained Gide’s statement that Simenon was “a great novelist, the greatest perhaps and the truest novelist that we have in French literature today.” Some boost for a novelist only 36 years old at this time!
During Gide’s final years of life from 1946 to 1951, Simenon addressed him as “Master.” Perhaps, this was because Gide served as “one of the rare ones, if not the only one, to whom he opened up about his conception of love and the nature of his relationships with women” (curious given their differing sexual orientations). Additional topics discussed rarely with others included evocations of his brother Christian (“the cadaver in the closet”); thoughts about criticism and critics; analysis of his personal writing system; and opinions on recent readings. In fact, “the more Simenon isolated himself from the world, the more he needed Gide.”
In 1960, Simenon observed: ”I believe that, all his life, Gide dreamed of being a creator rather than a moralist or philosopher. I was exactly his opposite and I believe that’s what interested him [in me].” In 1973, a full 22 years after Gide’s death, Simenon attested: “Gide provided me with something enormous, which was confidence in myself. For I never basically believed in the importance of what I was writing […] Gide helped in giving me the feeling that, despite everything, what I was doing had a certain usefulness.”