Some details about the latest Maigret translation for Anglophones. 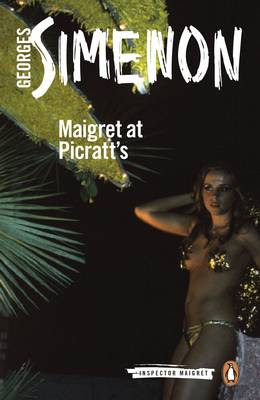 Penguin’s English translation of Simenon’s  Maigret au “Picratt’s” is now available through Amazon in the UK as Maigret at Picratt’s in both paperback and Kindle editions. The prices are £6.49 and £4.99 respectively. Here is the availability to Anglophones from other Amazon sources throughout the world in alphabetical order: NOW: Australia Kindle; Brazil Kindle; Germany paperback and Kindle; India Kindle; Italy paperback and Kindle; Japan Kindle; Mexico Kindle; Netherlands Kindle; Spain paperback and Kindle. May 30, 2017: Canada paperback and Kindle;
China paperback; Japan paperback; Mexico paperback; USA paperback and Kindle. An audio version from Audible.com is not yet visible on the horizon.
Maigret au “Picratt’s” originally appeared in 1951, but the English translation Maigret in Montmartre did not appear until 1954. Its translator was Daphne Woodward then, and now the translator is William Hobson. Be aware the ISBN-13 for this new edition is 978-0241240281
This work is the 64th in Simenon’s original order of publication and the 36th in Penguin’s modern series of translations.
This book struck me being atypical for the Maigret series. Negative attitudes toward effeminacy and drug addiction are prominent whereas Chief Inspector Maigret characteristically prides himself on being nonjudgmental. The extent of his associate Lapointe’s involvement with the girl Arlette is also unusual. Not only that, Lapointe plays a more prominent and active role in the criminal pursuit than usual. Arlette also figures in Maigret et l’homme du banc.