About the cat and parrot characters in a roman dur 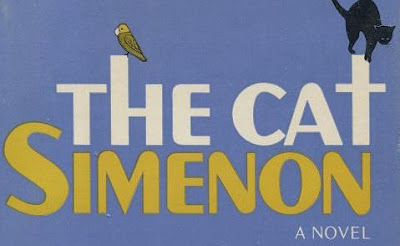 French literature has a famous cat—Colette’s Saha in The Cat—and parrot—Flaubert’s Loulou in The Simple Heart. Now, I’ve met Joseph the cat and Coco the parrot in Simenon’s The Cat. Georges had at least one cat—he called it Molécule—and his mother had a parrot—was it called Christian since her beloved son brought it to her from the Congo? These pets perhaps factored into the writer’s unique animal-bird pairing as ‘characters’ in his novel.
With “its eyes half-closed,” Joseph “spies on” Coco the same way Emile keeps track of Marguerite. With “its big round eyes,” Coco “watches” Joseph in the same way Marguerite keeps track of Emile. “Distrusting each other as well, the cat and the parrot, settled for observing each other from a distance, [but] not without a certain respect.”
Joseph delights Emile, but annoys Marguerite. To him, he is a “faithful companion,” but to her, he is a “vulgar alley cat.” The living Joseph “inspired a kind of superstitious fear in her” as he followed her around, “staring at her fixedly, as if searching to understand what she was going to do to him and his master.” Thus, “every time he rubbed up against her, she screamed and kicked it away.” In fact, Marguerite’s objection to Joseph being named after a saint leads to the couple’s “first conflict.”
Predictably, Coco delights Marguerite, but annoys Emile. She looks at it ‘tenderly” and talks to it “like a lover or a son.” Even dead and stuffed, she treats it as if it were still alive. In contrast for Emile, “the house resounded with its piercing shrieks” and he is forced to leave the house whenever “it’s time to give Coco a little exercise.”
Antagonists in their lifetimes, Joseph and Coco play different roles in death. Aggravated Marguerite poisons Emile’s cat Joseph, so it dies. Vengeful Emile plucks the feathers off her parrot Coco, so it dies. He pitches his dead cat into a trash can, but she restores her stuffed parrot to its cage, and so “the game had just begun.”
Joseph soothes Emile and harasses Marguerite only up until its death, but Coco harasses Emile and soothes Marguerite increasingly after its death. In fact, Emile finds “the dead parrot was more troublesome than the living one,” for he “never gets accustomed to its [now] noiseless presence” with ‘its mysterious and threatening expression.” Comparing himself to the “frozen parrot” with its “eyes of glass,” he feels as though he, too, is becoming Marguerite’s “pet animal.”
Thus, Simenon presents a truly unique and remarkable quartet with Joseph purring on Emile’s knee and Coco rubbing against Marguerite’s cheek, and then divides it into two competitive teams. But “they were equals,” so the game—or the war—goes on and on. What’s more, after the pets die, actually because they die, the conflict escalates to become the humans’ whole life, with husband and wife mirroring their pets’ behavior. Neither gives in and leaves; that would be a “victory” for the other. Each is just waiting for the other to die: “You will go before me.” So, the man and the woman continue on for years, playing their cat and parrot game.