From sentimental romance to crime fiction 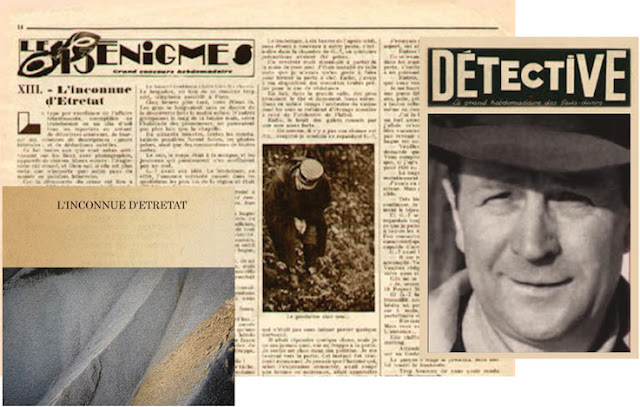 In an earlier post, I discussed La Pucelle de Bénouville, a roman grivois (“saucy story”) by Simenon published under the nom de plume Luc Dorsan in 1927 and informed to a greater or lesser degree by the author’s holiday in Normandy in the summer of 1925. In this post, I will consider two further stories inspired by the author’s stay in Etretat, one of which is firmly entrenched in the style of his pulp fiction sentimental novels and the other of which looks forward to the crime fiction genre which he was shortly to adopt, although it differs sharply from the soon to be launched Maigret series.
In Le Semeur de larmes, published in 1928 under the pseudonym Georges Sim, the Merets, a wealthy Parisian family, are spending their summer holidays in Etretat. One of the daughters, Gilberte, falls for the charm of a certain Max Darnetal and Monsieur Meret accepts the idea of their marriage. Gilberte discovers that five years previously Darnetal had been her mother’s lover and she learns from the latter that Darnetal has demanded a large sum of money to withdraw his marriage proposal and return compromising letters that Madame Meret had written him. Gilberte’s mother admits everything to her husband who forgives her, Darnetal thereby losing both Gilberte and the prospect of a large sum of money. The Merets are once again a united family and the story ends happily for everyone except the unscrupulous blackmailer.
Etretat also provides the setting for ‘L’Inconnue d’Etretat’ which first appeared as a Georges Sim short story in 1929 in Détective magazine before being republished under the author’s own name in Les Treize énigmes in 1932. The dismembered corpse of a young woman is discovered between Etretat and Bénouville. The private detective G.7 leads the enquiry but the victim’s identity remains a mystery and no young women have been reported missing from the hotels of Etretat. A young English woman arrives in Etretat and identifies the ring on the victim’s hand, claiming that it belongs to her, before leaving for Calais with an older man. Proceeding by deduction, and helped by information from Scotland Yard, G.7 discovers that the victim is in fact a young American married to a wealthy English gentleman but who was being blackmailed by a former lover threatening to reveal her less than honourable past. The blackmailer had killed her following an argument and the English gentleman, unable to locate his wife, had left on his own. At Calais, he discovered what had occurred and employed a stranger to retrieve the ring in order to avoid a scandal. The killer is arrested in front of G.7’s hotel where he had been waiting for opportunity to attack him and following questioning by the detective he admits everything.
In both narratives, Etretat is presented exclusively as the location for holiday villas of wealthy Parisians (Le Semeur de larmes) and upmarket hotels catering to the bourgeoisie and moneyed foreigners (‘L’Inconnue d’Etretat’). The use of such settings for romantic/adventure was a stock-in-trade of the escapist literature popular in Britain and France in the 1920s, providing a petit-bourgeois readership with the opportunity to participate at second-hand in the lives of the wealthy. This literary tendency was even mocked in a cartoon in the British satirical magazine Punch in which a publisher interviews an aspiring novelist:
‘I like your story, but I wish you’d give it a different setting: you know – society, the Ritz, Deauville, Ascot and all that sort of thing.’
‘But I’m afraid I haven’t any actual experience of these things.’
‘Oh, never mind about that. The people who’ll read your story haven’t either.’
The interest of ‘L’Inconnue d’Etretat’ lies mainly in the contrast between the character of G.7and the soon-to-be-created Maigret. Indeed, Simenon’s American biographer, Stanley Eskin, goes so far as to describe the three “Treize” short story series (Treize coupables, Treize énigmes, Treize mystères) as ‘anti-Maigrets […] as if he [Simenon] was zig-zagging towards Maigret and this was a last zag in the opposite direction.’ In looking for a prototype for the character of Maigret, one would do better to consider N.49 who appears in L’Amant sans nom, a 1929 Christian Brulls novel in which amidst the more characteristically exotic settings of Devil’s Island, Deauville and Paris, the central hero, Yves Jarry spends a short time hiding on a farm in… Bénouville. While G.7 is a suave gentleman amateur approaching his investigations as logical puzzles largely lacking in social context, N.49 is a professional policeman with a peasant’s heavy physique and features whose investigative method owes more to intuition, patience and obstinacy than the powers of deductive reasoning.
Twenty years would elapse between ‘L’Inconnue d’Etretat’ and Simenon’s next Etretat-based story, Maigret et la vieille dame, composed in California in 1949 and published the following year. In a future post, I will consider just how far Simenon had moved in the two decades separating these two narratives.