About a short novel written under pseudonym 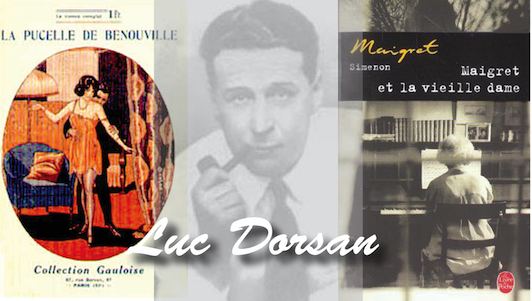 In her post of 25 November, Murielle Wenger considers the relationship between Simenon and the Normandy holiday resort of Etretat. Murielle points out that, with the exception of Maigret et la vieille dame, Simenon’s Etretat narratives belong primarily to the period in which he wrote popular novels under a variety of pseudonyms. In this article and a subsequent text, I will consider how the author first came to know Etretat and how his portrayal of the town reflects his literary development. In two further posts, I will look more closely at the Etretat based inquiry Maigret et la vieille dame before considering two contrasting television adaptations of the novel.
Simenon’s first visit to Etretrat was for a summer holiday in 1925 in the company of his first wife, Tigy, at the suggestion of a friend. At the very end of his writing career, in his Mémoires intimes, Simenon recounts their stay in the nearby village of Bénouville, mentioning that as their friend, a certain Madame Jouette, had no guest room, the Simenons rented an unfurnished room in a nearby farmhouse (“la ferme Paumelle”) in which they installed some rudimentary furniture.
Bénouville is mentioned in a number of later stories published under the author’s own name, but the village first appears in a number of romans populaires such as La Pucelle de Bénouville (Luc Dorsan, 1927), L’Amant sans nom (Christian Brulls, 1929) and Marie-Mystère (Jean du Perry, 1931). In L’Amant sans nom, the story’s hero hides briefly in a farm resembling the Simenons’ holiday location; in Marie-Mystère, Bénouville is the home of the Dorchain family, simple fishing folk based loosely on the family of Henriette Liberge (“Boule”) whom the writer had first met in 1925. However, it is in La Pucelle de Bénouville that we get the fullest portrayal of Simenon’s perception of a small Norman coastal village, or rather the impression that he felt would be most compatible with the advancement of his literary project as a successful author of pulp fiction.
The frontispiece of La Pucelle de Bénouville presents the story to potential readers as a ‘petit roman grivois’, a short saucy story. The text is certainly short at 47 pages including illustrations and would undoubtedly have been considered “saucy”, with a coloured cover image and numerous line-drawings of naked and semi-naked women and a storyline that can best be described as mildly pornographic in the publishing context of the time. Marie Carrelet, the only young female virgin in Bénouville, is chosen to represent the village in a beauty contest in Paris; she is accompanied on the train to the capital by four local counsellors, each of whom has the project of deflowering her. However, in the course of the journey she meets a handsome young man, Jean, who makes love to her and with whom she elopes on the train’s arrival. In their attempts to find Marie in Paris, the counsellors are involved in a number of comic adventures culminating in their presence at an orgy in a brothel. Unable to find Marie, they persuade the prostitutes they have met to represent Bénouville at the beauty contest; but at the last minute, Marie arrives and is elected as la reine des reines … but representing Paris rather than her native village, and at the end of the story she chooses to stay in the capital with Jean rather than returning to Normandy.
In short, Simenon’s portrayal of the Bénouvillais is scarcely flattering. The counsellors are presented as pompous and devious, but nevertheless ridiculous, rustics, out of place in the modernity of the capital. Clichés of life in rural Normandy (the village grocery store also sells umbrellas, cider is served instead of wine on special occasions at the town hall, even Marie’s family name is that of a fish – carrelet means “plaice” in French) are rolled out for the amusement of a Parisian readership. This ridiculing of the “other” – in this instance, the unsophisticated provincial – is calculated to flatter the reader, to encourage them to see themselves as everything that the “other” is not, much in the same way that many of Simenon’s “exotic” adventure stories of the period promote the notion of the superiority of the European, and specifically the Frenchman, in contrast to the savagery of the black or the deviousness of the oriental “other” (La Prêtresse des Vaudoux, Se Ma Tsien, le sacrificateur), or tap into other prejudices such as that of the presentation of Jews as financial swindlers or sexual perverts (Un Monsieur libidineux, Lili-sourire, La Figurante). It is impossible to know to what extent these prejudices represented the author’s own views; what we can say, however, is that as a pulp fiction writer, Simenon’s prime objective was to make money quickly and if this involved pandering to the prejudices of his targeted readership then this was the least of his concerns.
In addition to sexually explicit romans grivois, such as La Pucelle de Bénouville, and adventure stories, Simenon’s popular writings under pseudonym also included sentimental novels and, as the 1920s drew to a close, detective stories. My next post will consider the Etretat settings of one narrative from each of these genres.