On his roman dur about two people who are far apart, but living side-by-side 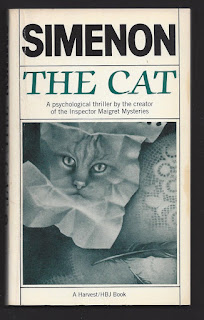 Simenon’s The Cat presents two striking characters, a man and a woman, husband and wife, who are living in antibiosis and symbiosis at the same time. Emile and Marguerite lead a bizarre parallel existence in which they do not talk to one another. They communicate through handwritten notes. Terse—sometimes a word or two, sometimes as long as a line—they are harsh. Because “each felt like a victim and considered the other a monster,” they are meant to be provocative: to annoy, aggravate, and intimidate the other.
Although their “dialogues were silent, they were too familiar with one another to not figure out each message, each intention.” Thus, they are aware of what the other is saying. The reader sees that, despite “having condemned themselves to silence,” they “nevertheless traded ferocious repartees.” In fact, their “little game” includes many other actions that strongly reinforce their hate-love relationship.
Simenon consistently maintains Emile and Marguerite side-by-side in their day-to-day activities, each “only sneaking a peek at the other when they didn’t think they were being observed.” Not wanting to “owe anything to the other,” each deliberately follows the other everywhere, in and outside the house. Although he states that “these movements and actions were more tragic or grotesque than comical,” they are really quite comical. When they head off “one behind the other, to go and do their marketing,” they shop the same market simultaneously, behaving as though the other wasn’t there. For daily recreation in the park, Emile goes out, book in hand, to sit on a bench and Marguerite follows, knitting in hand, to sit on an opposing bench.
This wordless dueling is particularly evident in the kitchen where they fear being poisoned by the other. Each maintains a separate locked cupboard to prevent tampering with their foodstuffs. Preparing and eating meals at the same time in the “not big” kitchen, they have  “to move carefully to avoid each other,” but they still “pretend to ignore each other.” Emile selects foods to “nauseate” her, and Marguerite picks frugal items to “establish that he spent more money than she did for food.” Eating at opposite ends of the table, “they chew slowly” purely to radiate contempt for the other’s choices. In the living room together, they punctuate their television watching with repeated skirmishes over channel switching. In the bedroom, they had slept in the same bed, but after the war began, Emile brings in another bed even though there are other bedrooms in the house. Jousting over having the window open or closed continues nightly. After spiteful Marguerite hangs her first husband’s picture on the wall, vindictive Emile hangs his first wife’s picture on the wall.
Simenon summarizes the couple’s incredible interdependent existence this way: “It was as natural and necessary for them to send each other venomous notes as for others to exchange pleasantries or kisses.” One observant character, who serves to separate the pair (although only temporarily), notes they “had as much need for each other as two young newlyweds.” Thus, right up to the novel’s end, there is no end in sight in this truly remarkably developed interaction.