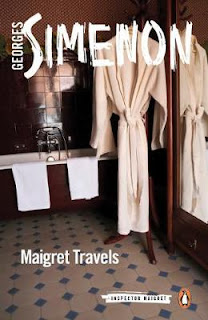 Maigret Travels, Penguin’s English translation of Simenon’s Maigret voyage, will be available through Amazon.co.uk as of January 4, 2018. Both paperback and Kindle editions are being released.
Because the paperback edition will not be available from Amazon.com until August 7, 2018, the opportunity for early delivery from the UK to the USA will appeal to some. However, the Kindle edition will be available on January 4, 2018.
As well, January 4, 2018 holds as the release date from the following other Amazon sources: Australia Kindle; Brazil Kindle; France Kindle; Germany paperback and Kindle; India Kindle; Italy paperback and Kindle; Netherlands Kindle; Spain paperback and Kindle.
Unfortunately, the later August 7, 2018 release date pertains to these remaining Amazon sources: Canada paperback and Kindle; France paperback; Japan paperback and Kindle; Mexico paperback and Kindle.
Be aware the ISBN-13 for this new edition is 978-0241303825, which should facilitate searching for the book from various other sources.
Maigret voyage originally appeared in 1958. It came out in English translation in 1974 as Maigret and the Millionaires. The translator then was Jean Stewart, and the translator for this new Penguin edition is Howard Curtis.
The original work was the 79° in Simenon’s order of publication, and this work is the 51° in Penguin’s modern series of translations.
This novel is interesting not only because Maigret has to figure out who drowned a millionaire in the bathtub of a luxury hotel, but also because he confronts a class—in this case, high society—that he is not familiar with. He faces it primarily in Paris, but also on the Côte d’Azur (the French Riviera) and in Switzerland. Despite his apparent discomfort, he doggedly works his way through the investigation, concluding it with a multi-character interrogation that flushes the killer out. And despite his success, he displays the empathetic component of his personality once again.