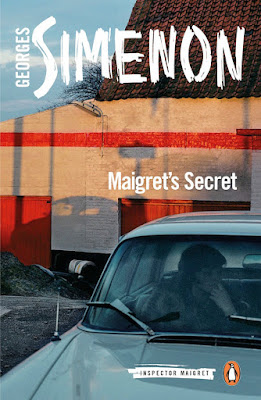 Maigret’s Secret, Penguin’s English translation of Simenon’s Une confidence de Maigret, will be available through Amazon.co.uk as of April 5, 2018. Both paperback and Kindle editions are being released. The opportunity for delivery from the UK to the USA will appeal to some because the paperback will not be available from Amazon.com until December 4, 2018.
On the other hand, April 5, 2018 holds as the release date from the following other Amazon sources: Australia Kindle; Canada Kindle; France Kindle; Germany Kindle; India Kindle; Italy paperback and Kindle; Netherlands Kindle; Spain paperback and Kindle; United States Kindle.
A June 18, 2018 date holds for these Amazon sources: Australia paperback.
The December 4, 2018 date holds for these Amazon sources: Brazil paperback and Kindle; Canada paperback; China paperback; France paperback; Germany paperback; Japan paperback and Kindle; Mexico paperback and Kindle.
Be aware the ISBN-13 for this new edition is 978-0241303870, which should facilitate searching for the book from various other sources.
Une confidence de Maigret originally appeared in 1959. It came out in English translation as Maigret Has Doubts in 1968. The translator then was Lynn Moir, and the translator for this newly entitled Penguin edition is David Watson.
The original work was the 82nd in Simenon’s order of publication, and this work is the 54th in Penguin’s modern series of translations.
This novel is interesting for multiple reasons: the relationship between Maigret and his only friend Pardon is on display. Their wives are compared. Martial infidelity, abortion, suicide, and murder are subjects. Maigret conflicts with Coméliau. And, of course, the denouement informs about Maigret’s “secret.”