On the voyeur as an auditor in "Across the Street" 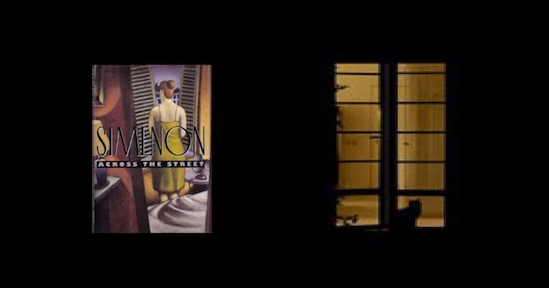 As Dominique watches activity across the street, she also listens to sounds in her apartment. They emanate from the bedroom next to hers. For years, she stagnated in that room, caring for her sick father, but now a young couple, the Cailles (the Sweethearts) frolic there. They are poor but happy. “They stuff themselves with life all day long” because “they have only themselves in the world, them and their joie de vivre….” Dominique is unhappy and poorer, explaining why she rents the room.
The lonesome woman finds the couple’s noises stimulate her to imagine their activities, especially their sex. For instance, once she learns Albert and Lina play music every time they “do that,” she listens attentively, visualizing them nude, “flesh to flesh, entwined, sweat glistening on skin, hair glued to temples….”
The two bedrooms share a salon that reclusive Dominique shuns except to enter or exit the apartment. Since she hardly ever actually sees the couple, the “voices behind the door become necessary company” for her and, fortunately for her eager fertile imagination, the couple “talks all the time.” In contrast, isolated Dominique “never talks to anyone” and “at the most she surprises herself sometimes by silently moving her lips.” At the times “the air is so heavy, it holds on to the sounds the way mud holds on to footprints,” Dominique advances to eavesdropping at the door between the rooms where “she can perceive their breathing, the slight noises that are a prelude to their daily explosion of vitality.”
Dominique does not restrict herself exclusively to listening. Learning “the first thing they do when they come home is undress,” she treats herself to direct visual spying through the keyhole. “Before this, she never had the chance to look at another woman’s naked body” or “see the thrusting member of a man reflecting animal power.” Frequent self-inspection in her bedroom mirror results, promoting her belief “it is not true she might be old! It is not true all might already be finished for her.” She interprets her image in the mirror as proof “she is still not yet an old maid.”
Life changes dramatically for the lonely woman on the very same night: as Dominique watches Antoinette take things to an extreme with her mulatto lover in her bedroom across the street, she hears the Cailles take things to an extreme in a lovers’ threesome in their bed behind the wall. And a tailspin rapidly results. Antoinette leaves home, and as Dominique looks at the “empty apartment across the street” and feels the “emptiness she was going to live with henceforth,” she hears more bad news: the Cailles will be leaving home, too. Aware she “revolves in a vacuum” whenever Antoinette and the Cailles are away, she knows what their permanent absence will mean. “All this makes her sad,” forcing recognition that her existence has been “a long series of flavorless days.” And, given that, “was this life? A bit of an unaware childhood, a brief adolescence, then emptiness, a jumble of worries, troubles, petty tasks and, already at forty, the feeling of old age with a joyless downhill course?” Realizing now she is “alone, more alone than anyone,” Dominique has “an intuition.” She decides “she will enter a new life,” and Simenon provides it.