SIMENON SIMENON. “MAIGRET IN COURT” COMES OUT MAY 3 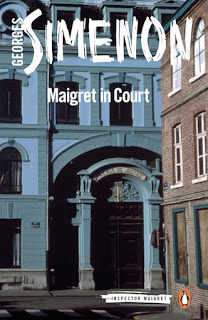 Maigret in Court, Penguin’s English translation of Simenon’s Maigret aux assises, will be available through Amazon.co.uk as of May 3, 2018. Both paperback and Kindle editions are being released.
The opportunity for delivery from the UK to the USA will appeal to some because the paperback and Kindle editions will not be available from Amazon.com until January 1, 2019.
On the other hand, May 3, 2018 holds as the release date from the following other Amazon sources: Australia Kindle; Canada Kindle; France Kindle; Germany Kindle; Japan Kindle; India Kindle; Italy paperback and Kindle; Mexico Kindle; Netherlands Kindle; Spain paperback and Kindle.
July 16, 2018 is the release date for the paperback in Australia.
The January 1, 2019 date holds for these Amazon sources: Brazil paperback and Kindle; Canada paperback; China paperback; Germany paperback; Japan paperback; Mexico paperback.
Be aware the ISBN-13 for this new edition is 978-0141985916, which should facilitate searching for the book from various other sources.
Maigret aux assises originally appeared in 1960. It came out in English translation as Maigret in Court in 1961. The translator then was Robert Brain, and the translator for this newly entitled Penguin edition is Ros Schwartz.
The original work was the 83rd in Simenon’s order of publication, and this work is the 55th in Penguin’s modern series of translations.
This novel presents an uncomfortable Maigret on the stand testifying about a brutal double murder case that includes a suffocated 4-year-old little girl. Then, one follows the “Mender of Destinies” as he “willfully shoulders a responsibility difficult to explain” related to an ensuing major crime. An interesting sidelight is a good look at the retirement home the Maigrets enjoy away from Paris in Meung-sur-Loire.