About TV magazines of the sixties 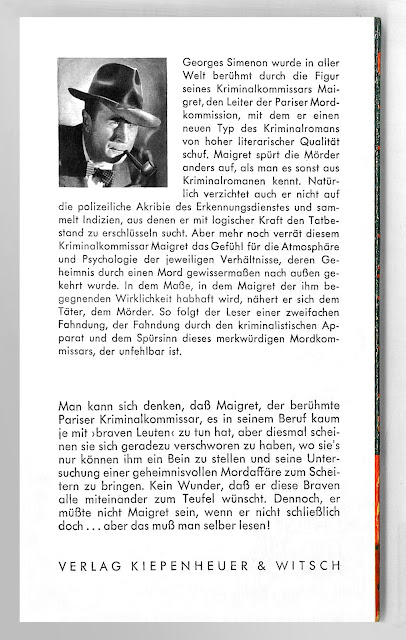 In my 5th school year, that was in 1965, there was a small miscellaneous corner shop, "Budke's", quite close to the school, where I got my weekly comics, "Mickey Mouse" and "Fix & Foxy", if I could afford them with my pocket money. But since I had gotten to know "Maigret" from the TV screen, I had a better idea and, more and more often, preferred to buy instead the TV magazine "HÖR ZU" with a lot of pictures in it as well, which mainly illustrated articles concerning TV programs and actors. With a new HÖR ZU in my hands, first of all I opened the Saturday pages to look for Maigret. There, regularly, a quarter or one third of the ZDF page, marked off by a horizontal black dividing line, was dedicated to the Maigret evening crime shows. Every time I discovered a new picture of Rupert Davies as the Chief inspector Maigret or of Ewen Solon as Sergeant Lucas, his assistant, I actually was very pleased. I remember only one time, when I was not pleased at all with finding not a single Maigret picture, but many other photos, too many, referring to a national football match. On the other hand it once occurred that I was searching for the bottom one-third Maigret page section and did not find it at all, at first sight. And then I had to open my eyes widely discovering the whole page filled with Maigret. And, exceeding all my expectations by far, that page even contained two colour photos, one of Maigret, and the other one of Lucas. That happened in HÖR ZU 34/1965, illustrating the episode "Love from Felicie".
Maigret colour photos in general were rare in those days. Every time striking one it was a big surprise for me. A few colour photos were taken by the BBC during the production of that series, once I discovered one of Helen Shingler as Madame Maigret, a rather small one, but in colour, that was in HÖR ZU 40/1965. By the way, you can order antique German magazines such as HÖR ZU at Historia Verlag in Freiburg. The magazines they offer are not used, they almost seem to have been printed yesterday! (There also does exist an inexpensive chance to take a look (and a photograph) of many Rupert Davies pictures from German antique magazines like "HÖR ZU", "Funk Uhr", "TV hören & sehen" and "BRAVO" in the national library Deutsche Nationalbibliothek, Frankfurt on the Main).
There were several colour photos of Rupert Davies published in other German magazines, when he had been interviewed for his part as Maigret, even some private ones, more or less, for example in "BRAVO". The ideas of presenting him photographically sometimes were pretty funny, such as the one that shows him as the detective spying through a hole of a newspaper, a hole big enough to see his entire face, smiling. That actor basically must have had a lot of humour! In Germany, there were a few cover pictures of him published, for example in "Constanze", that's why I once wrote to HÖR ZU asking them for a title page with "Maigret". At that moment, they didn't want, because they preferred to promote German actors, according to their answer.
At Christmas time in 1965, my parents and I were visiting a big store in Osnabrück, "Woolworth". In the book department I located the word "Maigret" on a special offer cardboard sign. Instantly I went to it. It belonged to a box of Maigret books, black ones, but with colourful rough title illustrations (no photos). On the back cover of each book there was a black and white photo representing a man with a hat on and smoking a pipe. I was taken aback, because that was NOT Rupert Davies! Well, it was the author. Nevertheless I asked my parents, if I could get three of those books. They said yes. So I picked out "Maigret und der Verrückte" (The madman of Bergerac), "Maigret und der Clochard" (Maigret and the Bum), and, of course, "Maigret und der Weihnachtsmann" (Maigret's Christmas)). The books were a Kiepenheuer & Witsch publication, and the fabulous and brilliant title pictures were made by the ingenious illustrator Werner Labbé. At home, I started reading those books, although they did not have any inside illustrations at all. And now, at last, I understood perfectly Victoria Voncampe's repeated announcing words, when she said: "This film is based on a novel of the same title by Georges Simenon." Actually, the German version of those TV episodes did have the same titles as known from the Kiepenheuer & Witsch paperback edition. Typically, almost all titles began with "Maigret and ...".

SIMENON SIMENON. RUPERT DAVIES AND ME