Everybody can be a voyeur. Movie fans have a chance to watch. 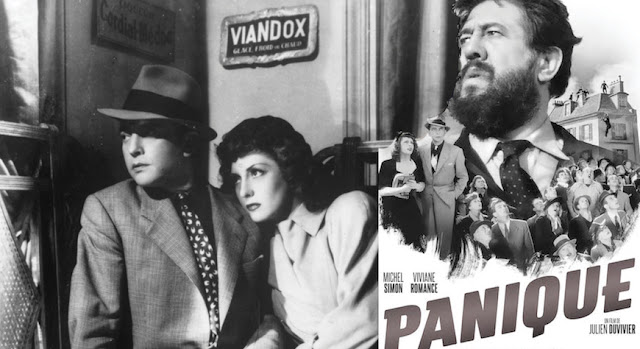 Simenon’s 1933 novel spawned four movies in 1946, 1947 twice, and 1989. Routinely disappointed by films failing to follow a book, I wondered how accurate these adaptations might be. What follows is my rundown (a confession: my ‘search’ for accuracy relies on secondhand descriptions of the first three films and direct viewing of the fourth) on their success.
The first film is Panique, a French production (a restored version of this film came out in 2016) directed by Julien Duvivier. (Panic is the title in English.) Unfortunately, judging from what I read about the film, the changes are far from faithful, causing me to not bother to track it down for viewing.
It seems Simenon’s Mr. Hire, a petty criminal and scam artist, remains an unpopular oddball voyeur, but transforms into Dr. Varga, an astrologer, spiritual adviser, and amateur photographer. A murder suspect, he falls hopelessly in love with the girl next door he has been spying on all along. She herself is hopelessly controlled by her lover, and with him playing a vastly expanded role in contrast to the novel, they engineer a scheme to frame Varga. Duvivier distorts Simenon’s story with a traveling carnival background, interpersonal bumper car collisions, photo shoots of a hungry dog and a homeless man by the protagonist, a funeral procession for the murdered woman, listening to hymns in and lovemaking behind a church, a revelatory fortune teller, a bloodthirsty butcher, expanded crowd scenes including mob violence, and a different cause of death for the scapegoat.
The second and third films are Barrio and Viela, Rua Sem Sol, both productions directed by Ladislao Vajda. They came out almost simultaneously as so-called “double versions” in that the two films had the same script, but the actors were different, being Spanish in Barrio and Portuguese in Viela—a singular exception being Milú who plays Alice in both. Because they go even farther astray from the Simenon story than Panique, I did not try to find them to watch. First, they focus in error on the homicide detective and the criminal-girlfriend pair that teams up to frame her shy neighbor (Simenon’s protagonist). In other switches, the cop sets a successful trap for the killer, and the good-hearted girl elopes with her silent admirer.
The fourth film is Monsieur Hire, a French production directed by Patrice Leconte. When I learned the film “sticks closer to the letter of the novel,” I figured it would be worth viewing. Unfortunately, this film fails much like the others, for it introduces numerous new and frankly bizarre elements into Simenon’s old story: Hire keeps white rats that get special burials. He patronizes a naked black masseuse and an electric tattoo artist. Alice spills tomatoes at Hire’s door in a weird ploy to achieve direct contact with the timid voyeur. Her evil lover and a single detective play prominent invented roles in their respective framing and pursuing of the innocent murder suspect. The three in the ‘love triangle’ interact at a boxing match. They also go ice-skating until the ‘fall guy’ literally falls on his face. To be fair, the film does get the names right; does show Hire doing his peeping (but the emphasis is more on his loving); and does portray the bowling, crowd, and rooftop scenes from the book. Yet, emblematic of its failure in accuracy is the voyeur lying on the ground at the end. He is not Simenon’s “dead man whose eyes had just been closed,” but rather Leconte’s dead man with his eyes wide open.