When a playwright unlocked "Le Pavillon d’Asnières" on stage 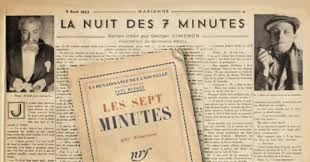 Upon discovering the short story The Seven Minute Night (Le Pavillon d’Asnières) had been adapted into a play, I wanted to read, if not see, the drama. Was the play an accurate or, at least, a reasonable representation of the 26-page literary creation?
The Little House in Asnières (Le Pavillon d’Asnières) by dramatist Charles Méré was a two-act and fifteen-scene production performed in Paris at the Théâtre de la Porte Saint-Martin in 1943. He introduced his work in the playbill this way: “Georges Simenon, the admirable teller of mysterious stories, has been until now the prey of cinema. This is the first time a playwright brings one of his narratives to the theater.” He goes on to define the core dilemma of a man found shot to death inside a house no one else had entered or left. “Was it assassination or suicide? Neither of these hypotheses seemed possible. The gun that killed the man had disappeared….”
Although Méré’s script eluded me, Monsieur Google did provide some helpful information from newspaper reviews by ten critics. What is apt to distress Simenon fans (at least, it did me) is to learn how much the play differed from the original story. It is unfortunate the playwright apparently “had to pad it with numerous twists and turns.” Examples given include “a political conspiracy, a cadaver substitution, and a brutal poisoning.” Fortunately, Simenon’s magic trick with the missing gun was left untouched! Here is my personal list of complaints, minor to major: 1) The victim Morotzov became Molotzoff. 2) Daughter Sonia in the story became wife Sonia in the play. 3) This “pretty girl, much younger than he, who is no longer living with him” surfaced as an early, prime suspect as the killer. 4) Several other invented characters forced G-7 (inexplicably changed to Inspector Jacquemin) to face multiple hypotheses and “the choice of a half-dozen possible culprits.” 5) The old man merely killed by a pistol shot in the story also had his head crushed by a sledgehammer in the play to “render it unrecognizable” and, thus, unidentifiable. 6) This “supposed dead man” reappeared ‘alive’ on the stage because “someone else had killed himself in his place” and went on to succumb at the play’s end.
No wonder one critic commented: “There is much more Méré than Simenon” in the play. To be fair, note that the playwright affirmed: “I brought some important modifications to the subject matter and added numerous events to the original narrative with Simenon’s approbation.”
And reviewers did describe “a work well done” in which “these disparate elements rather cleverly combine to stimulate curiosity right up to the end.” One wrote, “The evening was entertaining,” another, “Of course, it‘s a melodrama [but] a well built melodrama.” One called it a “praiseworthy interpretation, and one agreed the dramatist “has drawn from this action everything one could expect” while another offered, “What he added is not unworthy of the writer.”
While the play was well received and enjoyed success, that it appeared to have only had one run makes another statement. It is too bad we moderns cannot get the chance to take it or leave it.