SIMENON SIMENON. UNDER THE RED FLAG OF THE SOVIET UNION

A look at some direct observations of communism in Russia. 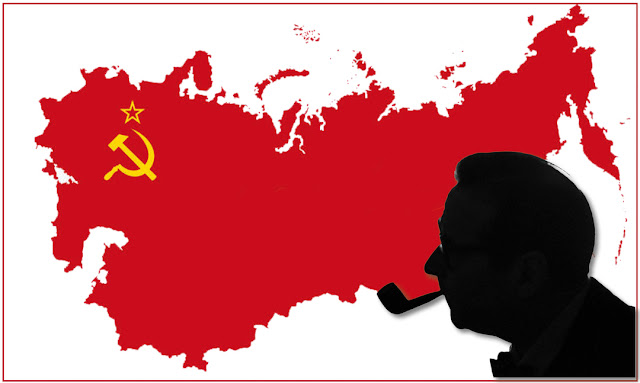 Simenon’s 1933 visit to Russia triggered a novel that biographer Pierre Assouline called “anti-communist.” The Window over the Way (also Danger Ashore and, originally, Les Gens d’en face) depicts conditions in a seaport city on the Black Sea as seen through the eyes of a foreigner.
This protagonist witnesses how the inhabitants suffer continual deprivation and continuous surveillance. Here is a glimpse at Simenon’s portrait: poverty and hunger abound. Everyone earns the same wage and, accordingly, everyone is poor. Affordable products are available at the Cooperative in theory, but it is often “empty,” and the alternative, the State run market “where there is everything, always,” requires hard cash, gold, or jewels, which is typically “too much” for most residents.
Housing is atrocious. The houses “seemed abandoned, never repainted, with windows missing panes, eaves dangling down, and water falling from broken gutters.” Not counting all those sleeping outside, “each house has one or two families per bedroom.”  And the folks inside, “what could they be doing? Yes, what did they do in all those bedrooms with beds and mattresses strewn all over the floor? The women weren’t cooking since they had nothing to cook. They weren’t sewing either, or hardly at all, for they always wore the same dress.” What’s more, “electricity is cut off every day at midnight,” both inside and outside. Water is often shut off as well, and when it does come back on, long lines of people with pitchers form at the faucets. Since drinking takes precedence over washing, everything is filthy.
People “swarm in the dust or sit on their bags of rags” when not standing in line, desperately looking for food or work. There are “few people in the streets, no shops, no restaurants, and no street merchants.” In short, “none of the traffic that makes a city a city” exists. Literally, “there are only three cars in the city.”
Hunger predominates. The novel’s opening line, “What! You’ve got white bread!” highlights how most people have only less expensive, lesser quality black bread to eat. Mornings, “200 people at least” line up in front of the cooperative “until a sign announces there are no more potatoes, biscuits, flour, or cereals.” Most everyone is “malnourished” and people die in the streets, but the party line continues: “They are not dying since they are living.”
Surveillance extends from suspicion through spying to denunciation and leads to arrests, imprisonments, and executions. The GPU, the ubiquitous bureaucratic state security system, enforces absolute compliance by arresting violators and beating interferers. When those brutal “Green Hats” choose to gun someone down in the street, no one pays attention. “Don’t the police shoot people in your country?” is the answer to the foreigner’s questions. Noticing how “every month several people disappear from circulation,” he questions why “all the others kept quiet.” The response is to “not ask any questions at all.” Even “if orders arrive incomplete, if you get robbed, if you get attacked in the street for your wallet, if someone dies in your office,” the advice is to “keep your mouth shut” because “everyone is the police!”