A glimpse of the man in the last three short stories 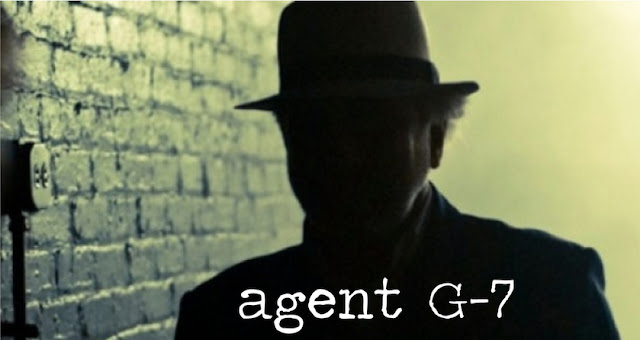 Although G-7 preceded Maigret in print originally, 17 Maigret novels appeared before G-7 resurfaced in 1933. Actually written during the period of the Maigret publications, those 3 short stories (the bad news is that none of these tales seem to have been published in English translation. They are available in an Italian collection: Tre inchieste dell’ispettore G.7) proved to be the last in the G-7 series, which ended with a grand total of 18 works.
Does the overlapping chronology of the two detectives indicate they were contending for Simenon’s attention? That these last G-7 stories were much longer in length than the earlier ones (averaging 37.5 and 6.5 pages respectively) suggests the writer might have been developing G-7 in order to give Maigret a run for his money. In any case, G-7’s quick disappearance stands in distinct contrast to Maigret’s long life.
The G-7 in the 1933 publications is not the same person he was early on. Although Simenon does not expand or change G-7’s (limited) physical description, he does develop his character further. What follows here is this later portrait as seen in the three stories, starting with G-7’s arrival at a small Mediterranean island on special assignment from Paris to investigate the sudden disappearance of three women in a short ten days. A “less self-assured” and “hesitant” G-7 behaves “absentmindedly” while the narrator, the friend who has always been at his side, takes over, reporting his observations, experiences, and feelings in detail. For example, it is the prominent narrator and not the deemphasized protagonist who gets shot. As well, he figures out the two ‘investigators’ have been drugged and he provides the antidote. Thus, this Doctor Watson-like figure, a Simenon ‘likeness,’ becomes more active in investigating and solving the case than G-7.
The second story revolves around a man shot to death, all alone in a house no one had entered or left, with no gun in sight. Here, “strange boy” G-7 behaves in “a timid way matching as badly as possible one’s idea of a detective.” Seeming disinterested and indifferent, an “uncomfortable” and “ambiguous” G-7 “withdraws.” He abandons the crime scene, his superiors take him off the case, and he writes out his resignation. But this all becomes clear, for it is because of a woman!  She is the dead man’s daughter, Sonia, whom G-7 “runs after like a madman.” The story ends with the protagonist embracing his loved one while the narrator carries on with the case.
Lo and behold, the third story presents a G-7 changed into a private detective for his first (and last) case: a derelict fishing boat left port mysteriously, only to be recovered empty—except for a strangled woman’s corpse found inside a water tank. The private eye is “merry” and “rejuvenated,” but it is because he will soon be marrying Sonia rather than because he is now a solo investigator. Not only does he “lack enthusiasm” for the case, but he gets sick to boot. Perhaps tired of his character, Simenon has a strengthened, active narrator surpass a weakened, passive G-7. Although life is no longer “favorable to their friendship,” the two “edgy” men do solve the case together. But, with “a peculiar smile,” G-7 “wraps things up” by ominously observing: “Novelists seek their subjects in particular spheres.” Thus, Simenon gives us a protagonist’s swan song and a creator’s goodbye.