On another novel about people watching each other

The Window over the Way (also Danger Ashore and, originally, Les Gens d’en face) is yet another display of Simenon’s fascination with and focus on voyeurism. 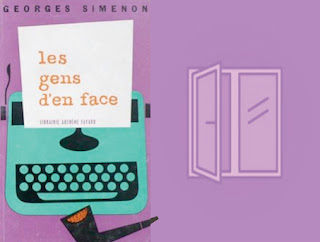 Protagonist Adil bey, a foreign consul newly appointed to a Russian city, occupies a second-floor office and apartment. Directly across a narrow street is a building with a ground level cooperative market for city residents and an upstairs apartment his secretary (and eventual lover) Sonia and her family occupy.
Adil bey’s windows have no curtains at all and the window curtains across the way are invariably opened, so his neighbors, who are “always leaning on the windowsills,” can “see everything he does.” The recognition that “they cannot not be observing me” spurs him on the same approach. This particular two-way connection demonstrates how everyone can—and does—watch everyone else throughout the city, a fact Simenon emphasizes heavily throughout the novel.
The voyeurs’ windows are so close one can visualize most every detail within the opposing apartments. For example, Adil bey notes a green hat hanging on the wall that “instantly becomes the heart of that setting.” This hat belongs to Sonia’s brother, the chief of police whose Green Hats prowl the city as constant pre-Orwellian reminders that ‘Big Brother is watching you.’ Although Adil bey can hear “the complaints of the bedsprings” when the windows are open, he cannot, however, understand their words since he does not speak Russian.
Thus, the voyeur observes Sonia and family “as he would have watched fish in an aquarium.” As well, he regularly observes the community’s activities at the cooperative. He watches “forty people with empty string bags” leave its bare shelves and  “five or six women on their knees” pick up crumbs in the street. At the same time, the voyeurs “across the way” observe him day and night. Despite his attempt to hide his developing intimacy with Sonia behind “solid wall panels,” the family, symbolic of the ubiquitous spies throughout the city, is omniscient.
During all this back-and-forth watching, everyone exists in striking isolation, “each in his corner.” Adil bey becomes “like the others” but more so, for as a foreigner, his “corner is even more isolated than the others.” Maintaining one’s isolation is one way of combating spying, and so he learns to “carry his aloneness everywhere” as if “there were a protective cloud in which one walked.” As he “looks at people with the suspicion of an animal all alone,” he wonders, “how had he not understood from the very first that here everyone is locked up like this?” As Adil bey struggles to work out a solution to the evolving dilemma with Sonia, he “covers his windows with great sheets of paper” so that no one can look into their world, “our home,” and they “will be sheltered from everything, separated from all.” Sonia goes back to her family while Adil bey goes off to arrange their escape, but when he returns to pick her up, “the windows across the way are closed, the curtains drawn.” He will never watch or even see her again. The report of gunshots and the hearse underscores the hopelessness of those on both sides of the street believing they might hide what they are doing.