Hazel Paton is currently a PhD candidate in French at the University of Newcastle, New South Wales, Australia, and she's working on a thesis project entitled “The Tripartite Simenon: Georges Simenon as Maigret and Others”. We are very pleased to welcome her as a contributor to our blog. 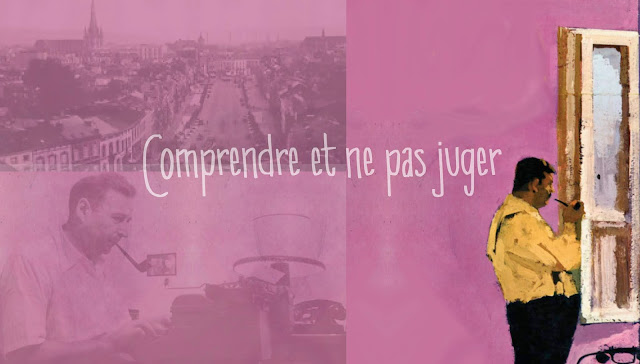 As a child, Georges Simenon was deeply religious. Georges and his brother Christian attended a Jesuit school and each Sunday accompanied their father to the parish church of St Nicholas in Liège, Belgium, where the family had their own pew. Their devout mother claimed the protection of the Virgin on Georges and dreamed that he would, following the lead of one aunt who was a nun and another who was married to the sacristan of nearby St Louis, become a priest. Simenon claimed that a distant cousin, also called Georges, had been the Bishop of Liège, but this appears to have been a fabrication.
As a choir boy, Georges assisted at 6 o’clock Mass and the experience of rising on dark winter mornings and his terror of unknown perils lurking in the shadows as he made his solitary way to meet the priest at the Bavière Hospital permeate his writings. He rang the Sanctus bell as he preceded the priest taking the sacraments to the dying in the hospice. In the yearly Corpus Christi Day procession, he and other choir boys scattered rose petals along the priest’s path. Each Easter Monday, he accompanied his family on a traditional pilgrimage to the shrine of Our Lady of Chèvremont. His teachers and family supported his desire to become a priest.
As World War I ended in Europe, Georges had a crisis of faith when, in rapid succession, he discovered sex, his father became ill and he left school to join the workforce as a reporter. He later asserted that the church’s rejection of his adolescent need for sex was the driving force in his denunciation of the church.
When he started to write, Simenon peopled his novels with the inhabitants of Liège and transferred his own hopes and dreams onto his most famous protagonist, Commissaire Maigret. Thus, Maigret had been a choir boy, wanted to become a priest, lost his faith, failed to finish university and married a woman who epitomised Simenon’s ideal woman. More importantly, the detective embodies characteristics often mentioned by Simenon as forming part of his ethos and his childhood aspirations. One is the Arsène Lupin ability to live several lives concurrently, the other to be a “mender (or rectifier) of destinies”. Part of the belief structure Simenon claims for himself and projects onto his creation is that “there are no criminals”, which can be contributed to Simenon’s rejection of the church’s teaching on original sin. This explains why Maigret often listens to the perpetrator of a crime and sometimes helps him avoid the consequences of his action.
Maigret’s complex role far exceeds that of a simple policeman who arrests criminals and brings them to justice. The detective’s first tenet is to “understand and not judge”, which Simenon himself demonstrated by his participation of the Sans Haine (Without Hatred) pacifist political movement in 1938. It probably also reflects Simenon’s desire that history not condemn him for his life choices. As a detective, Maigret combines the roles of doctor (mender of destinies), priest and policeman. Simenon defines the priestly role as “consultant Father God”. Often, eg, in Maigret and the Saturday Customer (1962), the criminal seeks him out in order to confess and be granted absolution. After listening, observing and, as in Maigret and the Man on the Park Bench (1952) and Maigret in New York (1946), identifying with and entering into the criminal’s skin, the detective goes into a trance while his mind processes the information. His workmates mock him as they see him entering this phase. Biographer Patrick Marnham connects this with the “mystical interludes” the young Simenon experienced as a devout believer.
Although he claims to have read and reread the Bible, Simenon says that Religion and Morality with capital letters ruined his life. He adds that he rejects outright the “cult of the Virgin” and asserts that, along with presidents de Gaulle and Truman, the Pope and all kings, Jesus Christ Himself had come to doubt that He was who He claimed to be. Yet he gives his chief protagonist, with whom he identifies, the qualities he says he no longer believes in.