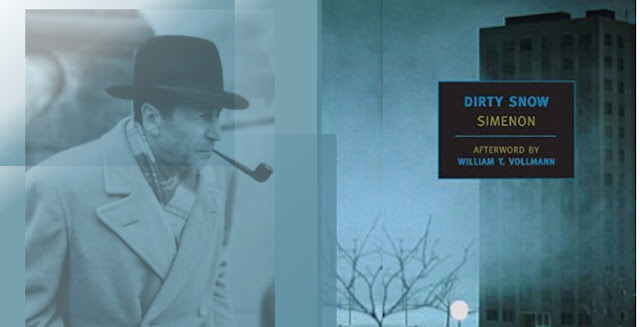 Georges Simenon’s found himself in something of a dilemma when his younger brother Christian died in a skirmish in Vietnam in 1947 as a member of the French Foreign Legion.  Having chosen not to mention in his memoirs, Pedigree, that he even had a brother, Simenon confided to his mentor André Gide the bare bones of the tragedy: “You’re the only one I’ve talked to about my brother. That's why, also to you alone, I have the sadness to announce that he was killed in action on the Indochina front.” He then went on to write a 790-page memoir, Mémoires intimes, in which there are passing references to a brother but again no precise details.  He fails to mention that Christian had come to him clandestinely in Paris in 1945, charged with war crimes and fleeing the post-war purge committees that punished collaborators and performed summary executions.  Georges suggested, as one of three flawed options, that he join the Foreign Legion under an assumed name.
In the absence of autobiographical details we have to examine Simenon’s novels to see what he reveals about the loss of a brother who “adored” him. In the years following Christian’s demise, Simenon wrote four novels that can be seen as attempts to rewrite the outcome and ease his conscience about the part he played in the event.  In order, these were Le Fond de la bouteille (1949); La Neige était sale (1948); Les Quatre jours du pauvre homme (1949) and Les Frères Rico (1952). With the exception of Quatre Jours (Four Days in a Lifetime), each was made into a movie.  Although Le Fond (The Bottom of the Bottle) was written first, Simenon chose to publish La Neige (The Snow was Dirty) first, and the reader can perhaps see in this novel the extent of Simenon’s conflicted feelings.
Firstly, his protagonist is an only child, the 19-year-old son of the Madam of a brothel in an identified country under occupation during an unspecified conflict.  Second, it is not clear which brother is represented in this analogy.  To intensify the sense of dislocation, the country is hidden beneath deep snow that obscures its landscape.  By removing the identifying markers and location, Simenon can examine the dilemma of war and occupation with greater objectivity.  Protagonist Frank Friedmaier brazenly collaborates with the invaders and, although he commits murders and moral iniquities, the crime for which he is arrested appears to have more to do with the invaders than himself.
If we read this work from the perspective of Christian as the protagonist, the tone is judgemental at first then becomes a plea to recognise and take into account the youth’s lonely upbringing and existence.  As Simenon tells Gide, Christian “paid dearly and courageously for a venial sin while those responsible escaped.  I’ve asked myself if I was wrong to send him there (to fight with the FFL). Upon reflection, I think not.” If we consider the author as the main character, he examines his own conduct in the light of his brother’s sins and finds himself wanting, yet also pleads for absolution.  Jane E. Keller points out that the words ‘good’ and ‘evil’ lose their meaning in wartime and occupation, creating a confusing wilderness for people to navigate. (Jane Eben Keller, “’They Have Everything!’: Georges Simenon in Arizona”, Journal of the Southwest, 44, 4, 2002, 476)
Simenon may indeed have felt judgemental towards Christian, whose transgressions had the potential to reflect badly on the writer’s successful career.  At the end of the war, however, he found himself under scrutiny by the purge committees, deemed—along with many other Francophile writers—to have collaborated by continuing to publish throughout the Occupation.  He also had to answer for contracting with Nazi-run Continental Films to have nine novels filmed in that era.  When the committee eventually caught up with him, he pleaded ignorance of the provenance of Continental Films, fabricated a few events portraying him in a better light and which he later sought to validate by including them in his Mémoires intimes, and sent his lawyer Maurice Garçon to speak in his place.  His flight at the end of the War to the USA softened the impact of a two-year ban on publishing, and the charges were eventually dropped.