The author and the Nobel Prize: did he want it or not? 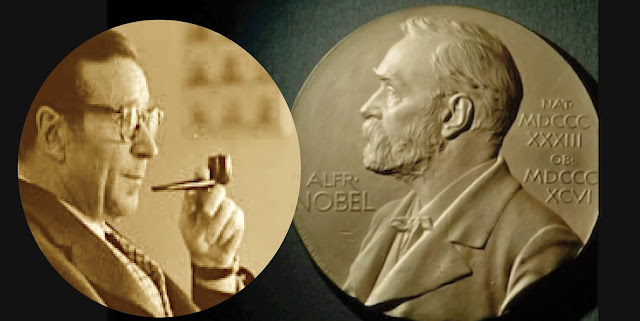 George Simenon became one of the most popular, widely read authors in the world. But how did he view himself as an author? Or how did he want to be viewed? Aware of commentary that reported feelings Simenon had expressed over time about being recognized (or not) as a literary figure, I decided to try and uncover some of what he actually said. Since becoming a Nobel laureate stands as a major symbol of success or, at least, importance, below is a chronological listing of some verbatim (although translated) statements Simenon made about winning that award. They reflect a transition in feelings over time. To my ear, Simenon’s attitude about winning the prize evolved progressively from being smug to being sour.
In a 1937 interview with Pierre Lagrade, although Simenon was only a young 34-year-old writer, he announced: “At 40, I will publish my first true novel. At 45, I will have the Nobel Prize. […] Everything I have forecast up to now has happened. So, I will have the Nobel in 1947.” Ironically, it turned out when the time came, André Gide, his admiring correspondent, was the one who won the prize.
In a 1951 letter to his long-term publisher Sven Neilsen, Simenon penned this: “I confess I would be enchanted to have it [the Nobel prize]. It is actually the only distinction to which I have always attached some value.”
In 1957, the year that Albert Camus won the Nobel Prize, according to journalist Matthew McAlister, an “outraged” Simenon declared: “Can you believe that asshole got it and not me?” He then kicked over his television set. Biographer Pierre Assouline cites similar words coming from Simenon’s mouth at that time, but reports the strongly pejorative term as the milder “little idiot” and, in addition, questions the believability of the verbal statement made directly to him by his second wife, Denyse Simenon.
In 1961, Simenon dictated this statement: “The Nobel would have pleased me some years ago. Now, I am not sure I would accept it.” The “not sure” hedge stands out here. This phrasing appeared in print when his dictée was eventually published as When I Was Old in 1970, which suggests that his uncertainty, if not ambiguity, was lasting. Later on in 1961, according to literary critic Julian Barnes, the writer “was still thinking about the prize and telling his diary he did not care.” Barnes quotes Simenon this way: “Let them fuck off and leave me in peace.” This suggests a man with shifting feelings. Was he angry or disappointed?
In 1964, according to biographer Patrick Marnham and again Julian Barnes, Simenon was “abusing” the Nobel jury as “the cretins who still haven’t awarded me their prize.” This sounds as though Simenon not only wanted the prize but also thought he deserved it.
In 1973, shortly after Simenon announced he would no longer be writing, journalist Henri-Charles Tauxe obtained an interview about his reasons for this decision. The retiree explained himself in detail, concluding firmly that he was now “a man without a profession.” Tauxe pushed on: “Even if they offered you the Nobel Prize in Literature?” Simenon responded first, “At 45, I would have accepted it,” but immediately added, “In recent years, [when] the Germans and Americans began work to nominate me for the Nobel, I cut it off. I would not, in any case, have accepted it.” True or not, this sounds like a man who might have, at least, changed his mind.
In 1981, during an interview with journalist Bernard Pivot, Simenon recalled his long-ago prediction of winning the prize in ten years, specifically in 1947, but this time he amplified what had happened then: “It was almost done. So, I announced in the American newspapers […] that if they gave it to me, I would refuse it.” Pierre Assouline, after reporting the earlier version of the prediction in his biography, slyly observes: “He was correct; it was done. Not for him, but for Gide, who was crowned with the Nobel Prize that year. Simenon did not have to refuse a distinction they had not offered to him.”
I was unable to determine if, at this late date, Simenon was being truthful or lying to himself. I did not uncover further statements in the subsequent period before his death in 1989.