SIMENON SIMENON. A SON TALKS TO HIS FATHER 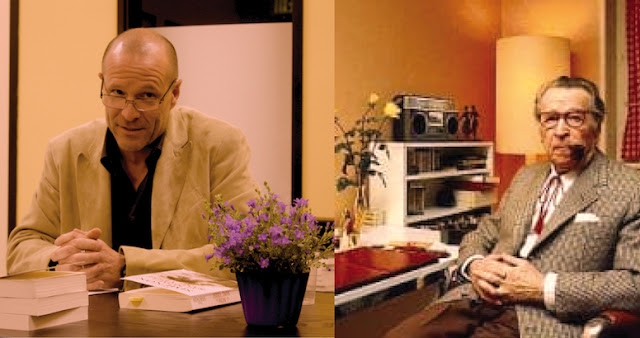 In the 2015 book De père à père, Pierre Simenon succeeds in being very much like Georges Simenon and Jules Maigret: that is to understand and not judge. Lacking an English translation of From Father to Father, presenting some of its material to Anglophones seems appropriate. Becoming a father, relatively late in life, stimulated the author to reconsider his own father, his relatively old parent, 24 years after his death. An observer relying on embedded distant memories, Pierre employs an intriguing method: while driving cross-country from California to Vermont all by himself, he discusses parenting with his deceased father. Given its intense content, the author intersperses clever time-outs including descriptions of nature, geography, history, politics, celebrities, and his stopovers. Written in clear, fluid prose, it is a travelogue by the son and a dialogue with the father. The latter is actually a one-way discourse with responses implied. Whatever, it is not a confrontation; it is a conversation. “I do not accuse you of anything, I simply seek to understand.”
This combined biography-autobiography is the product of a man who “does not believe one decides to write. Rather one writes when one feels the need to write.” Despite its passion, it evolves as an open, balanced accounting and analysis of the circumstances a son experienced with a father, which Pierre calls “our thirty years of complicity.” Importantly to Simenonophiles, he corroborates much that others have reported and rumored about the man, offers some new information, and drops a few surprises. The young Pierre may have blindly admired “mon Dad”—this lifetime affectionate tag for his father would be “my Dad” in English—but the adult Pierre recalls the dark side he saw, calls a spade a spade, and expresses dismay when he feels it.
First, here are some positives: there was “that strength, as much physical as mental.” The “veritable bear hugs” and the ability to tear a phonebook in half with his bare hands proved the former. The mental showed up in how “the pillar of our family” kept an “open door,” attesting to his “interest” and “availability” to “understand us, your children, […] to treat us, as much as possible, as equals, without condescension.” Pierre attests that he learned more from his father than from his formal schooling. He credits him for valuable, more casual lessons gained while taking walks, playing chess, swimming, and going marketing together. No wonder Pierre chose to spend time with “his papa rather than his pals” and considered him “my best friend.” Georges’ attention to his children continued to the end of his life. For a late instance, out of a desire to protect his sons after his death, the father wrote a letter restricted to posthumous reading by them. It was a “compelling and imperative injunction,” supported by his will, to “not get involved with his literary estate” so as to avoid “conflicts” and “dissensions” between them. Notably, Pierre confesses: “Your three sons committed the error of going against your desires” and “we created conditions that ended your ‘greatest wish’ to see us stick us together.”
Now, here are some negatives: They come to light, as Pierre points out, “because I have no reason for them, I would like to know why.” To know the whys for that “very early” time when “you explained to me the chubby old man, all dressed in red, his sled pulled by raindeer was a myth.” Why the absence of the usual things sons and fathers did together? “No kids’ games, no hide-and-seek, not even Monopoly…” No playing “clown on all fours beside me.” No storytelling. No bedtime readings. Why the lack of involvement in his broken arm, his cut and infected finger, his appendectomy, his doctor or dentist visits? Pierre bemoans, “In my domaine, as you called my bedroom, you paid me only a half-dozen visits in seven years!” and asks, “Where were you, Dad?” [Sic, without the important ‘my’]
Although this father-son relationship was not always easy, Pierre’s frank exposition and thoughtful examination combine to justify his ultimate conclusion: “My Dad, with all your qualities and all your faults, you were a marvelous father, the best that I could have wished to have […] Thanks to you I am a man and I will strive to always stay a man. I love you, my Dad.”