On the 15 Sancette short stories not available to Anglophones. 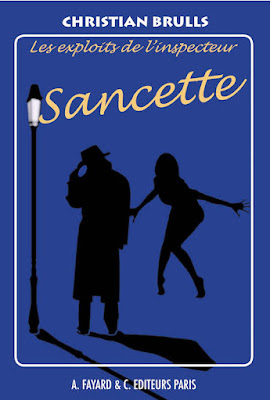 My recent trip through Inspector Sancette’s Investigations proved them to be so unlike the other Simenons, both the Maigrets and romans durs, that they suggested a different author. Unfortunately, as far as I can tell, they are not available in English translation, so I take the liberty of revealing some of their features to Anglophones below.
These stories are very, very short. They average just 3.5 pages in length. They are light adventure tales, closer to humorous than serious. They are imaginatively conceived and cleverly constructed. Simenon employs a Watson and Holmes duo à la Conan Doyle to carry the plots. The pair investigates a wide range of mostly petty crimes in diverse sites throughout France: a city rooftop, a country chateau, a coastal beach, an inland museum, a river freighter, a rural farm, and so on. They usually start or finish in low-key spots like Sancette’s little apartment, police headquarters, or “our little restaurant on the Place Dauphine”―shades of Maigret and his associates.
[ATTENTION: don’t read from here on if you have the ability to read the French originals, which are currently available in Les exploits de l’inspecteur Sancette.]
Below are some summaries, each presented as a sort of fait divers, an abbreviated anecdote common to French newspapers, designed to stimulate interest:
1) Our hero dresses up in mountain gear, climbs up onto a roof, hangs by a rope from a chimney, and tosses a lighted Fourth of July firecracker through a fifth-story window to foil a mad bomber by scaring him into a faint.
2) Our hero practices with a five-pronged grappling hook on a thin cord, uses it to reconstruct a diamond heist, and then hooks and reels in the robber by his pants, whose grass-stained bottom provides the clue needed to locate the loot.
3) Our hero confronts a reputed scoundrel who protects himself with a bomb ready to blow in his pocket―a bold move in a crowded dance hall for anyone but Sancette, who deduces that a misplaced scar on the man’s face means he’s an imposter.
4) Our hero suddenly pounces upon our narrator, beats him up, and quickly arrests an apparent bystander. It’s a slick burglar, who has just picked incriminating evidence from Sancette’s pocket and lingers at the scene out of curiosity and gets collared.
5) Our narrator is again bait to trick a ‘wheelchair-bound’ crook into walking.
6) Our hero orders our narrator to shoot a lady in the face, but she doesn’t fall down.
7) An empty chest is sealed, but when the seals are broken, it holds a body.
8) Our hero uses a trick police ID photo of his own cousin to trap a dishonest witness.
9) Valuable documents disappear from right beneath the eyes of their archivist.
10) Our hero sticks his knife through a keyhole into a criminal’s eyeball.
11) A priceless vase is shattered and then mysteriously restored to flawless condition.
12) Our hero herds three people into a phone booth to expose a crook in disguise.
13) An empty derelict freighter moves inexplicably around in a harbor by night.
14) Our hero feigns pickpocketing, but a necklace planted in his pocket trips him up.
15) An innocent cow is shot dead just for drinking from a rain barrel on a farm.