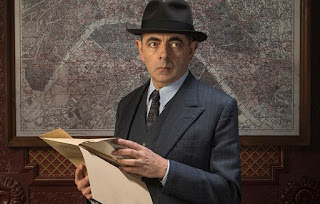 Night At The Crossroads, ITV’s newest  Maigret adaptation, will premiere on Sunday April 16th at 8pm. Curiously, ITV Studios has once again chosen a holiday opportunity to present this work.
Rowan Atkinson made his debut as Maigret last year, appearing in two films, Maigret Sets A Trap and Maigret’s Dead Man. Now, the comedian turned serious actor promises this will be “richer” than the character’s previous two outings.
John Simenon, the author’s son and the film’s executive producer, first pointed out that “Most people were discovering a new character because the last time they had an opportunity to see a Maigret on TV was more than 20 years ago with Michael Gambon.” Then, he continued: “My concern was not a comparison between the two, but one between Rowan Atkinson and Mr. Bean. The reaction was very positive and the public mostly recognized Rowan for what he is: A great Maigret.”
Stewart Harcourt, the same man who adapted the two previous films, wrote this feature length adaptation. What is more, Harcourt is currently working on a fourth film, Maigret In Montmartre, which is expected later this year and will star Atkinson again.
My personal projection is that a movie adaptation of the original novel, La Nuit du Carrefour/Night at the Crossroads, could be great. First of all, it’s loaded with atmosphere. Light and darkness effects are prominent throughout, which lends itself to cinematography in particular. Indeed, the story is set in 1950s Paris, the City of Light. The movie was actually shot in Budapest, but I don’t recall any criticism of that site as the location. The mystery increases as the story moves along. In fact, this could be presented as a thriller in the modern genre. Most of all, there is considerably more action in this tale than in most Maigret stories. (The work stands as number seven in Simenon’s Maigret series of 103.) One should anticipate numerous eye-catching dramatic scenes: a dead man in somebody else’s car. The dead man’s wife shot. A femme fatale seduces. There is chasing. Fighting. Shooting. Wounding. Strangling. Killing. As for the protagonist, Maigret investigates, interrogates, runs, punches, shoots, and doctors. Of course, he’s done many of these things throughout his career, but not so many during one case. I wonder if the film will show him jumping down into a well the way he does in the book.