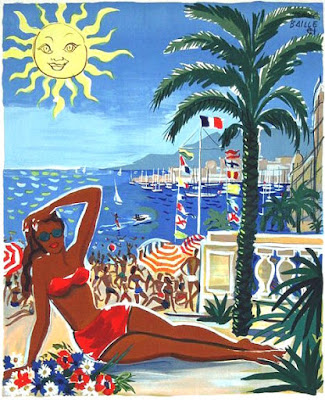 After Simenon left America in 1955, he lived in France a little over two years before moving to Switzerland where he remained for the rest of his days. That Pierre Assouline’s biography Simenon only devotes 2 ½ pages to this period is striking. The timeline on Simenon.com is equally sparse. So, learning more about the celebrated and usually newsworthy Simenon during this period became a challenge.
The time Simenon spent in France was primarily on the southern coast around Cannes. He first started living at “La Gâtounière” in rural Mougins, a 15-minute drive from Cannes, where he lasted about six months. Denise, John, and Marie-Jo were there with him while Tigy and Marc were presumably living in a hotel. The villa and the village were small, but the writer’s literary productivity was big (three novels). Plus there were some big events. Michel Carly outlined several: Simenon discovered the stripper world and added to his scoreboard of sexual conquests. Denise miscarried a child in 1955 and suffered for it. Simenon drank “to stimulate his creativity,” and some violent behavior became a recurring problem. Denise increased her drinking, too, and her “first psychological troubles appeared.”
Simenon switched next to “Golden Gate,” a “more spacious” villa and “better situated” in a wealthy section of Cannes, where he lasted about 22 months. Although the writer did produce seven novels, his life there was considerably laid back. A February 1957 article in Le Soir Illustré describes a visit with Simenon at the sumptuous villa and provides these insights into his life style there: “In fact, the danger of overworking doesn't threaten Georges Simenon, who rarely works more than three or four hours a day.” Indeed, he “spends the major part of the day in the villa’s garden or swimming pool, watching his children swim, or amusing them by appearing in the swimming pool’s ‘window’ as a ‘frog-man.’ And finally, one learns “his other favorite pastime is feeding his goldfish.”
Curiously and in great contrast, Simenon had yet another residence (one not mentioned in Simenon) during this period. It was a little nest in Cagnes-sur-Mer, a small coastal village a half-hour’s drive from Cannes. A 2009 article currently on http://www.cannes.maville.com/ provides some details: a “modest” birthday gift to Denise in 1956, this “intimate house” was the smallest in the village. The couple called it their “Simple Abri” which translates as Simple Shelter. From the base of its “single minuscule room” with a “single front window ” and a “particularly steep staircase” up to their “bed in a loft,” they led an “ordinary village life.” Simenon walked the streets regularly, played boules (bowling on dirt) in the village square, sailed his sailboat along the shore, and, as he had promised Denise, did not type a single line of prose while there. The article concludes with this footnote: when Simenon “awarded the Gold Medal” to La Dolce Vita while presiding at the annual Cannes Film Festival in 1960, “it was surely not by chance.”
In sum, Assouline claims reasonably that Simenon left Cannes since he was not “particularly attached” to a place that was no more than “a land of retreat and escape.”