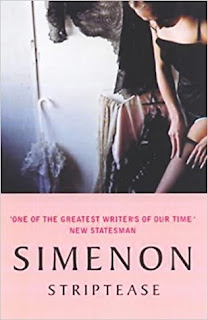 Before the novel Striptease came out in 1958, Simenon indicated: “I wrote an original screenplay for Clouzot. I couldn’t do it from a novel because that is impossible: one thinks screenplay or one thinks novel.” Ironically, a movie only came out in 1987 and then it was merely a 57-minute television adaptation. Here’s why the ‘movie script’ written in Cannes, way back in 1957, would make a great movie in Hollywood, 60 years later in 2017:
Striking scenes: Simenon’s telegraphic but precise descriptions remind of the instructions one sees in a script. Living sketches in a tawdry nightclub, where dimmed lights and flowing alcohol disguise seediness and immorality, flow freely. Undulating under strobes and spotlights, sensual ‘dancers’ are “more undressed” after each flash “until completely naked save the requisite g-string.” Clothes are unzipped and flesh pawed by the customers. When not stripping down and hustling tricks alone, the “girls” sleep and live in close proximity. One observes them in beach, restaurant, hospital, and funeral locations, where the scenarist graphically enhances their communication and conflict. The dialogue and descriptions are explicit but not obscene: one hears “Let me check out your breasts.” One watches women “going into trances of ecstasy” and “reaching the end of their pleasure” as they climax while stripping naked on the stage and lying belly down on the beach. Intercourse in the English translation softens euphemistically to words like “Well, did he have you?”
Colorful Characters: Center stage, one observes four older, worn down stripper/ hookers and one young, fresh debutant, all combining “the same vices” with different ambitions. Aging Célita is the star as “the only one who knew how to dance,” but is worried about losing her skills. Chubby Marie-Lou, coarse but effectively aggressive and sexual. Well built Natacha, “so big one thought more about a statue in a square than a woman to take to bed.” Rounded Ketty, more hooker than stripper. Beautiful Maud, the beginner with “still smooth, bright pink nipples.” They have two bosses: Monsieur Léon, basically a pimp, and his wife, Madame Florence, basically a madam, dominating and demeaning their enslaved employees. Bit players include a fleshy hatcheck girl, a fawning teenage boy, a manipulative bandleader, an insightful bartender, and many bizarre clients, even a closet homosexual.
Provocative Plot: When the new girl Maud outperforms the other strippers, she threatens all the women, especially Célita and Florence. These two hate each other because conniving Célita has been maneuvering to supplant clever Florence as Léon’s regular lover and the nightclub’s real boss. Playing “fragile” to attract him, Maud turns Léon into a lovesick puppy, exciting the two jealous rivals to collude in getting rid of her. As Florence becomes sick physically and Célita deteriorates mentally, Maud progressively strengthens her position. Florence’s death triggers Célita to seek vengeance on both Maud and Léon in a tense final solution at which point Simenon throws an unexpected curveball….
Striptease may never become the intended racy film, but it will remain a good read.