Does Inspector Sancette look like Chief Inspector Maigret or not? 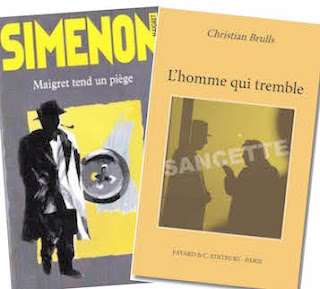 Georges Simenon created Inspector Sancette, a police detective prominent on the list of Maigret precursors, in 1929. The writer presented the first accepted true Maigret in Pietr the Latvian/Pietr-le-Letton in 1931. Now, here’s a look at Sancette to see what personal features, if any, promote identification of him as a Maigret precursor. I started with Sancette’s very first appearance and tracked him through 14 subsequent short stories. Thirteen of these were published from May 1929 through February 1930 under the pseudonym of Christian Brulls, one under the pseudonym of Georges Sim in 1934, and one previously unpublished story under his real name in 1999.
So, exactly how does Simenon portray Sancette? Although the descriptions are scant and sparse, one quickly discovers a character rond et rose, that is, he is “plump and pink.” He’s “a big boy” and his handshake is “a little fat and soft,” but one does not learn how much he weighs, how wide he is, or how tall he is. Pinkness applies time and time again, at least to Sancette’s “chubby” face, which is a “baby face,” but it often suggests he is pink all over. Similarly, very often he is “blond,” at least in his hair, but it also often suggests he is blond or fair all over.
Plump and pink and blond are about all Simenon provides in terms of direct physical description, but one can develop a good visual image of Sancette from how the writer depicts his personality and behavior. For example, as his eyes “flash, shouting the pleasure of a kid who has pulled off a good trick,” one easily envisions the sort of boyish, exuberant person Sancette actually is. In particular, he smiles all the time, and “that smile so youthful, so innocent and so unique to him” is widely variable and extremely expressive. Candid, childish, sweet, funny, kindly, engaging, and annoying are just some of the adjectives Simenon adds to this smile to build Sancette’s image. What’s more, he laughs a lot. In fact, as he often “breaks out laughing” in the face of threats, obstructions, and the rare setbacks, he nicely displays his optimistic, positive nature.  So too, his customary “happy voice” and “cheerful tone” exudes “friendliness” especially “when he’s sure of triumphing.”


In a distinct contrast, I simply cannot recall or imagine Maigret smiling and laughing and expressing upbeat sentiments in such a way. Yet Inspector Sancette does evince Chief Inspector Maigret a few times―a very few times―manifesting how the exception proves the rule. For instance, in his interrogations, Sancette “talks seriously” and “listens seriously” and shows “patience” and “his usual confidence” the way Maigret typically does. Sometimes, Sancette even wears a “worried brow” and is “too composed, even too formal.”


To sum up, Sancette reveals himself to be a smiling and agreeable, active and spry youngster. He is not at like the serious and surly, massive and slow, older Maigret. Perhaps in the full novels Sancette is more filled out and, therefore, more like Maigret, but to this point at least, he presents as an opposite rather than a look-alike. One critic classified him as an anti-Maigret. Another likened him to a puppy. Given Maigret the pachyderm, I don’t buy into the prototype concept for Sancette.