SIMENON SIMENON. A EUROPEAN LOOKS BACK AT AMERICA / 1 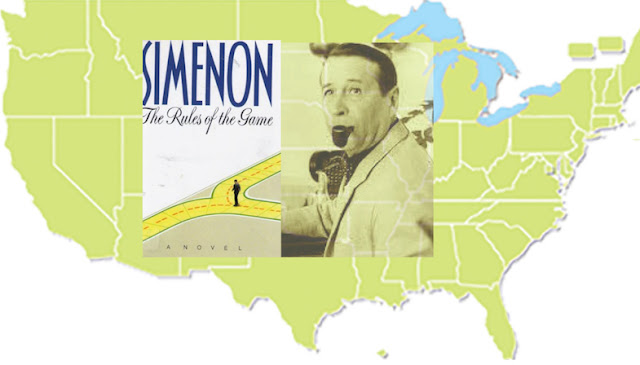 La Boule noire—literally The Black Ball, but The Rules of the Game when published in translation—was written in April 1955, just four weeks after the novelist had left the United States for good. Back in France after 10 years, did his return to that welcome atmosphere stimulate this critique of the society he never really fit into?
Walter Higgins, a middle-aged, middle-class American native, lives comfortably and contentedly in a small American town in rural Connecticut during the 50s. The story begins with him mowing his lawn like “the majority of men,” accompanied by the “furious noise” of at least three other lawn mowers. He’s proud of his “modern house,” in fact, his “brand new house,” which was one of the “steps that for a long time had appeared the most important, if not the definitive step” in achieving success. It “rose up precisely” on Maple Street in “the best neighborhood in town,” and most American communities have their Maple Street.
Walter has four children, the oldest in her late teens, and his wife, the high school classmate—he “admired Nora without really being in love” with her—is expecting their fifth. Walter does not drink or smoke, but follows his “bacon and eggs” breakfast and reading the Sunday paper with dressing up and walking down the street with the family to church. Afterwards, they all sit down to “chicken, mashed potatoes, and green peas.” Indeed, “the menus were regulated like the rest of their existence and the same dishes reappeared on the same day, week after week, along with conversations around the table so similar that one could say the words without thinking.” Weekdays, the oldest child rides her bike to her job at the bank and the others take the bus to school, all coming home afternoons to raid the icebox, watch television, play baseball, etc.
This totally American man had “started off at the bottom of the ladder” and, in a Horatio Alger like scenario, had “hoisted himself up by his bootstraps” to become store manager of the local branch of a supermarket chain. He works there 12 hours a day, where “a week rarely went by” without him running a big “bargain sale.” This particular week, it’s a great “shoe polish” deal, complete with a “young salesgirl who could have been a movie star” polishing “a giant shoe” with an “electrical brush.”
When not at his paid job, the eager man makes time to volunteer as secretary for the American Legion post, treasurer for the school board, and assistant treasurer for the boys’ baseball club. Walter’s only problem is that he has not yet been accepted into the Country Club. Becoming a club member stands as “a symbol, the consecration of his success” in his mind, but a single anonymous black ball blocks his acceptance and signals total rejection. Simenon hits Walter with this blockbuster early in the novel and then focuses on its effect on his protagonist. The “community” has pulled the rug out from under his carefully erected American dream world. He regards this event as “the collapse of himself, in sum, of Walter J. Higgins […] He no longer existed and would never exist again.” The reaction of this seemingly perfect candidate, but pitifully “naïve” man, is the subject of an essay to follow.