Fécamp then and now 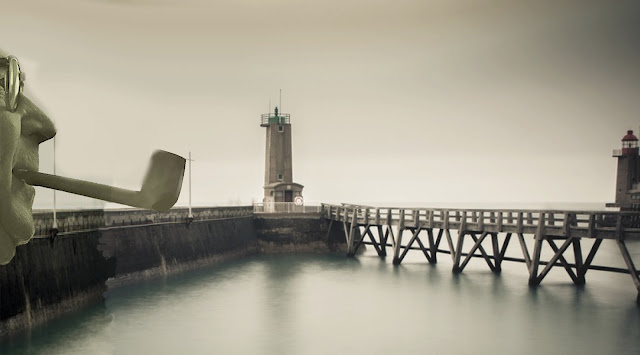 By the end of 1937, Simenon, tired of life in Paris, had decided to move on yet again and January 1938 saw him begin an extended trip in search of a new home. His wife, Tigy, explained later that ‘we loved the sea and we travelled all along the coast looking for the ideal place’; their voyage would take them all the way from Dunkirk on the Belgian border to La Rochelle on the Atlantic coast and it was in the course of this journey that Simenon made his final visit to Fécamp. The town’s subsequent appearances in the author’s fiction, often represented as the recollections of his characters, such as René Maugras in Les Anneaux de Bicêtre, would be as he remembered it from the 1920s and 1930s. Some eighty years having passed by, it seems only natural, therefore, to ask whether a visitor to present-day Fécamp will recognise the locations so vividly depicted in Simenon’s writings.
After 1945, the coal-powered trawlers were progressively replaced by diesel-engined boats, as Simenon had himself predicted in his 1934 newspaper article ‘On ne tue pas une flotte de pêche’ (‘You can’t kill a fishing fleet’) but contrary to the title of Simenon’s text, Fécamp’s cod-fishing industry did die out following the Canadian government’s exclusion of foreign fishing boats from the Newfoundland Grand Banks in the 1970s. Fécamp’s last long-distance cod trawler the Dauphin abandoned the port in 1987. Although a much smaller fishing fleet remains in Fécamp, the ‘huge iron boats belching black smoke’ described in L’Homme à la cigarette have largely been replaced by pleasure vessels, the quayside is no longer lined by wagons being loaded with ‘cod whose smell impregnated the whole town’ (Les Anneaux de Bicêtre) and, fortunately perhaps, the visitor is not required to ‘walk in oily puddles shining with fish scales and their rotting entrails’ (Pietr-le-Letton). The Argentin shipyard in the Bassin Freycinet where Simenon’s boat the Ostrogoth was built is long gone.
Yet some things are little changed. Fécamp remains a small provincial town whose population has scarcely changed since the 1930s and which suffers from the same poor rail transport links which obliged Maigret in Pietr-le-Letton to leave the Paris-Le Havre mainline train at La Bréauté to take a branch line to Fécamp. ‘The chapel standing on the upstream cliff and the long white line of the casino of the casino below the downstream cliff’ (‘Le comique du Saint-Antoine’) can still be seen and the visitor can take a drink Chez Léon like Simenon and so many of his characters at the Hôtel-restaurant du Progrès on Quai de la Vicomté.
While historical events inevitably change the economic activities of a town, they cannot affect its climate or physical location. Any visit to Fécamp in autumn will almost inevitably take place under the conditions described in ‘Le bateau d’Emile’ when ‘It rained almost every day for those two weeks, with low clouds, a grey choppy sea and a sou’westerly wind.’ As evening falls, the Maigretphile will recognise at once the ambiance of the commissaire’s pursuit of Pietr-le-Letton: "[…] ahead of him, he glimpsed the deserted jetty, a long black line stretching into the night with waves splashing up on either side. […] The red and green lights of the channel shone through the darkness. The lighthouse perched on the rocks flashed its beacon at fifteen-second intervals over a wide patch of sea and lit up the nearer cliff face, lending it, for that brief instant, a kind of ghostly light. […] In front […] the dark tumult of the sea. Behind […] the town with its shops and its slippery cobbles. "
It would, of course, be unrealistic to expect to find Simenon’s Fécamp frozen in time, but a trip to the town will reward the reader seeking to immerse him/herself in the novelist’s celebrated atmosphere and to better understand the social background of the Fécamp novels and short stories. And, with the opening of the town’s brand new multi-million-euro Musée des pêcheries scheduled for February 2018, there could not be a better time to start planning a visit.