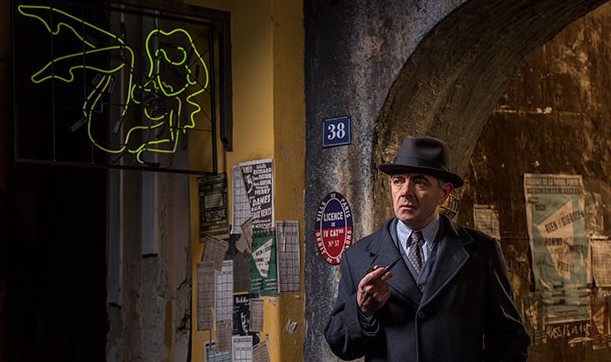 Maigret in Monmartre, a feature length film of almost two hours in length, will be shown on television, December 24th, at 8:30 PM. Notably, ITV Studios has once again chosen a holiday opportunity, Christmas Eve, to debut this work. The film is based on Simenon’s Maigret au Picratt’s, the 64th novel in the Maigret series, a book originally published in 1951 and subsequently published in two different English translations as Maigret in Monmartre and Maigret and the strangled stripper, practically simultaneously in 1954. Penguin published yet another English translation, entitled Maigret at Picratt’s, as recently as 2016. Thus, one should have no difficulty locating old and/or new editions of the book if one intends to read it before seeing the film.
My projection is this film will display a familiar Maigret directing an investigation featuring multiple interrogations, the release of a person of interest as live bait, and a manhunt for a killer. One would also expect the filmmakers to capitalize on the local color of the Montmartre section of Paris (although look-alike Budapest was the actual setting for the filming.) There should be colorful characters like a drunken but beguiling strip teaser, an infatuated young Maigret associate, an addicted, decadent countess, a young delinquent drug addict, and a mysterious would-be triple murderer. And, beyond lovesick Lapointe, Inspectors Lucas, Janvier, Torrence, and Lognon should all appear. What’s more, if the film stays true to the book, usually nonjudgmental Maigret will face some challenges in the tricky themes of drug abuse and effeminacy. And, of course, there should be at least two stranglings and one shooting.
What the filmmakers choose to keep, discard, change, or embellish should fascinate.
And, most certainly, the debate about Rowan Atkinson’s success in playing the Chief Inspector will renew.