An examination of another atypical roman dur 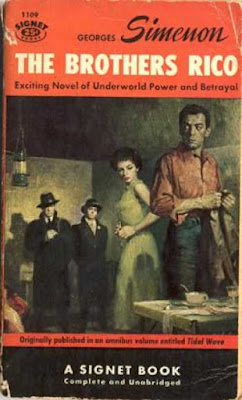 The Brothers Rico differs substantially from most of the romans durs I’ve read so far.  Generally in this line of Simenon’s works, it seems his protagonists develop as inevitable victims of an inexorable destiny. Here, in contrast, Eddie Rico, the eldest of three brothers working for and controlled by the “organization” (make that the Mob) behaves knowingly of his own volition. As one wonders about possible denial, indifference, naiveté, and stupidity at times during the intrigue, statements predicting and explaining his behavior flood the novel. While what Eddie does may seem unavoidable, his actions are consciously active.
Another separator from other romans durs is how very American this book is. Although of Italian origin, the Ricos are American born and bred. Their story evolves in American settings within American culture. The panorama extends from Florida and its pelicans and alligators, motorboats and hydroplanes, into Pennsylvania “at the end of the world” where “everything was dirty, grey, depressing” on to New York City among its soda fountains, pinball machines, jukeboxes, and penny arcades, to end in California among its “cars of every make and vintage… ancient model-T Fords and flashy Cadillacs, pick-up trucks and motorcycles.”
Despite having the “same blood,” going to the “same school,” belonging to the “same street gangs,” and taking part in the “same fights,” the brothers respond variably to their experiences in the melting pot of America. In confrontation with the “organization,” accountant Eddie (It was only when he left his “own territory” that “he was no longer The Boss.”) and hitman Gino (“He had always been a killer by instinct.”) and driver Tony (“He was so crazy about speed and motors he did it for the fun of it.”) make very different choices. As well, Simenon portrays the American Mob as it squeezes, steals, suspects, spies, and slaughters, highlighting the “perfected” way it performs “according to an almost inalterable ritual”
At first, prime protagonist Eddie is content. “Deep down he was a happy man.” He has a wife, three daughters, and a maid plus “a nice house, brand-new, modern, dazzling white in the most fashionable section” and “one of the best cars on the market.” Indeed, “everything was beautiful… …it felt like living in the middle of a travel poster.” Eddie “never asked for more than his share,” and when the organization pressures him to perform, he raises “no objections for, according to his code, he should not refuse.”


With “a deep-rooted feeling about the necessity to follow the rule, about the folly and the peril that lies in departing from it,” a frightened Eddie follows the “organization’s” ruthless directions, cooperating and sacrificing in order to save his life, protect his position as “boss” of his “own territory,” and preserve his lifestyle and family. Although an unlikely tragic hero had emerged and the Mob “never asked him anything difficult again,” one wonders if Eddie would recover from his bad actions and again enjoy the good life. Simenon asks “Perhaps it would come back?” and answers, “Already the word Angelo used was doing him good: ‘Boss…’ He had worked hard, so very hard, since the store in Brooklyn, to get there!”