Some ironies of the confrontation between the Belgian writer and the American judge. 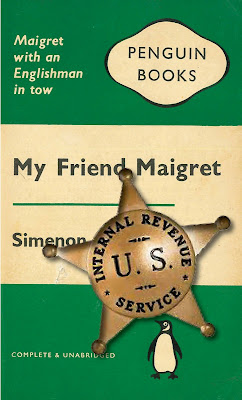 There is something prophetic about some comments on national judicial systems Simenon made while living in America: “If I were guilty, I would prefer to be judged in America… If I were innocent, I would prefer to be judged in England… In France, the laws change too often.”
According to Assouline, “the seat for the Simenon, Inc. enterprise” was Shadow Rock Farm during the five years the writer lived in Connecticut. Notably, the businessman Simenon “paid his taxes solely to the American Internal Revenue Service” during that period. That he could boast about earning $30,000 for 2 days work on a 1950 Christmas story shows how lucrative his business of writing was.
In February of 1955, Simenon decided to “settle down in France” and immediately wrote his publisher Nielsen about the news, asking him to “maintain absolute secrecy” because “the Internal Revenue Service would be able to demand a large sum of money as security [against taxes owed].” He left in March of 1955.
Ten years after Simenon left America for good, the United States Tax Court heard the case George Simenon v. Commissioner of Internal Revenue involving unpaid income taxes. Here’s my summary of its report: Simenon claimed that, since he was “a resident” of France, he was exempt from U.S. income taxes. The IRS disagreed because he had a U.S. “permanent establishment” for business. A renter from July 1950 and an owner from November 1950, Simenon inhabited Shadow Rock Farm until March 1955. (He was its rental landlord until its sale in 1963.) He subsequently lived in France until June 1956 at which time he moved to Switzerland where he lived until the time of the trial. Significantly, he had set up an office at Shadow Rock Farm for writing and related business affairs. Indeed, his income tax filings from 1950 on, including a partial return for the first three months of 1955, showed business expense deductions based on a 50% business use of the house.
The judge cited Simenon’s “strained” argument in regard to “his dilemma” of taking the position of conducting business and deducting his business office at first and then “resorting to a finely spun series of contentions which are patently an exercise in avoiding and overcoming the position.” In effect, Simenon “had not established the negative proposition that he did no more than seclude himself in the ivory tower of his house in Connecticut writing out plots and typing manuscripts, completely detached and disassociated from the crass and practical activities of dealing in the business matters….” Furthermore, the judge opined: “Royalties do not spring, full-fledged, from a pen or typewriter, like Athena from the brow of Zeus (although many writers wish that they would). Royalties grow out of contracts […] royalties result from sales […] the royalties in issue are, therefore, a type of commercial profits.” His ruling? “Royalty income of a nonresident alien for the entire taxable year is subject to the U.S. tax if at any time during the year he had a permanent establishment in the United States.” How ironic it is that the writer-businessman Simenon, who said, “If I were guilty, I would prefer to be judged in America,” was, in fact, found guilty in America.