Some observations on his writing period from 1950 to 1955 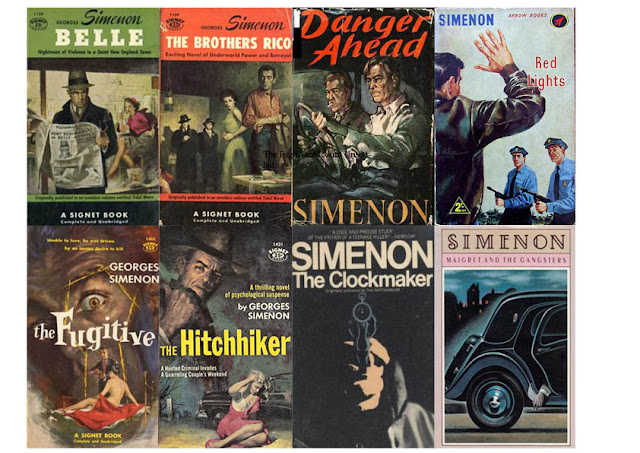 Biographer Pierre Assouline recounts how, shortly after settling down in Connecticut, Simenon was tempted, even pressured to become a naturalized American citizen, but something imperceptible, perhaps intuitive, restrained him. Notably, Simenon was at the same time under consideration for election to the Royal Academy of Belgium and he wondered if being an American writer and a Belgian academician might be incompatible. It seems that the discrimination he observed directed against Jews, Blacks, and Communists eventually influenced him to “renounce becoming an American. Definitively.” Nevertheless, Simenon would later on describe the 10 years he spent in America as “the only years I would love to relive.”
While contently in residence at Shadow Rock Farm, Simenon really put his nose to the grindstone and his daily writing ritual was “immutable.” (He broke this schedule once a month to travel to New York City for restaurant and nightclub hopping with Tigy.) As a result, the author was extremely prolific, writing 26 novels during those five years. Contrary to what one might have expected, only four distinctively ‘American’ novels resulted: 1. Belle 2. The Brothers Rico 3. Red Lights/Danger Ahead/The Hitchhiker 3. The Clockmaker/The Watchmaker. There were two other novels that fell somewhat short: 1. Maigret, Lognon and the Gangsters,which involves Americans in France during the story. 2. The Fugitive/Account Unsettled, which shows non-Americans in America toward the end.
A substantial number of the novels written during Simenon’s Connecticut period were Maigrets, actually 13 of 26 or 50%. The contrasting ‘American’ novels were like romans durs, featuring familiar themes that evolved “in accordance with the same logic, based on an inner need and sense of fate, sometimes disrupted by personal events.” Ironically, Anglophones can only envy Francophones because 15 of Simenon’s “romans américains” are available to them in a 2009 two-volume Omnibus collection. They begin with Les Destinées, written in 1929, years before living in America, and end with La Main, written in 1968, years after he left America.
Some Americanization of the Belgian author is visible in his choice of words in the ensuing books. Indeed, as he became more proficient in English, he began playing a role in verifying the translations of his works. “Before, he didn’t care. From that time on, he nitpicked.” I understand Simenon having been irritated, even angered by those translations. Personally, I found the Maigrets (prior to the current modern Penguin series) way too British. For example, petrol in translation for essence harshly inserted another ‘foreign’ word into my American mind. As I saw it, gas would have fit right in and not destroyed the French atmosphere. A similar problem occurred with the translation of le commissaire Maigret. The British translator used Superintendent Maigret whereas Simenon wanted Inspector Maigret. I think Chief Inspector Maigret was (and is) an even better choice, at least for Americans, because it more clearly describes his position within the French police system. I wonder if the translations chosen now consider where the most books will be bought. America or Britain?
David P Simmons
Pubblicato da Maurizio Testa a 02:08