SIMENON SIMENON. “THE DREAM HOUSE FOR A NOVELIST” 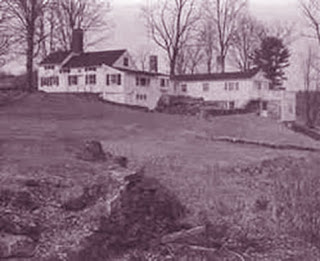 In 1950, Simenon picked out his “dream house” in Lakeville, Connecticut. According to details in a income tax case filed against him later on, he first rented the house on July 27, 1950 and subsequently purchased it on November 1, 1950. He lived there until March 19, 1955 when he left the USA for good. Before departing, he instructed his lawyer and real estate agent to offer the property for sale. However, it did not sell and, in fact, remained unoccupied until December 1957. It was rented thereafter up until it was sold on July 15, 1963.
In 1953, Paris Match published an article describing Simenon’s “26th house” as summarized here: Shadow Rock Farm derives its name from an old Native American legend. It sits without nearby neighbors at the bottom of a valley with a flowing stream and a hill of rocks and trees behind. Originally constructed in 1760, it is now of the style called "rambling" in America, as if wings were added during expansions without worrying about symmetry, the way branches grow on a tree. Built on several levels, it contains 18 rooms with 8 bedrooms and 6 bathrooms. Although a plain white house on the outside, inside everything is painted, lacquered, and varnished, bright and bursting with color. Simenon’s office is a small, soundproofed room underground. It contains a grey metal desk with the “classic and sober look like that of an American businessman.” On the desk, there is a typewriter, some white paper, a manila envelope with the outline of a developing novel scribbled in pencil on its back, and a ready arsenal of cleaned pipes. The article concludes: “The principal characteristic of Shadow Rock Farm […] is that Simenon’s personality determines everything. […] The property has neither walls nor hedges, like all American properties [DPS: this would actually be atypical for an old New England farm], but the outside world is stopped at its border as though pushed back by the dense Simenon atmosphere it comes up against.” Simenon’s own words “I am rooted here” tend to support this interpretation.
In 1954, I had a curious chance experience while visiting a high school classmate in Lakeville. We were driving around the countryside, looking for things to do, when we passed by a large, sprawling white farmhouse, well off the road, sitting up on a hillside. Pointing up to it, my friend mentioned by name the famous French author who lived there. I was then in my second year of studying French and excited by the challenge, but the Georges Simenon he was referring to was just a name.
In 1984, soon after the happy rekindling of a desire to read French novels after a 30-year interlude, I happened to be visiting a similar small Connecticut town about 13 miles from Lakeville. As I was poking around at the town library’s used book sale, I came across a stack of five Maigret novels offered at the attractive price of five cents apiece. The Yankee in me told me to check their condition, so I flipped through them, and a striking image flashed into my brain: lo and behold, it was Shadow Rock Farm. I saw then and can still visualize exactly how it looked way back in 1954 (as the image above graphically confirms).