An unhappy murderer becomes happy, but is he crazy? About "The Man Who Watched The Trains Go By" 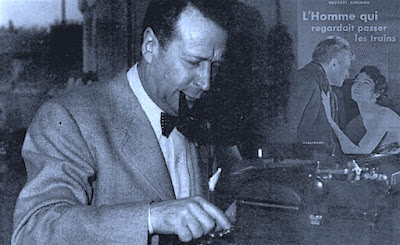 The protagonist in Simenon’s The Man Who Watched The Trains Go By doesn’t fit the common mold apparent in the romans durs I’ve read so far. Instead of watching a ‘hero’ slide downhill into darkness and dismay, one sees Kees Popinga climb to a state of liberation and happiness.


On a day when so far “his actions did not have any more significance than they did in the thousands and thousands of preceding days,” seemingly ordinary Popinga, like many of Simenon’s protagonists, starts heading for “a tumultuous future,” but this one has a most ironic twist.
Popinga’s unfolding adventures show him (and us) how unhappy he was in his earlier life. His wife ruled the roost. The henpecking woman, whom he calls Mommy in his mind but not to her face, dominated and controlled him. “In my house, or rather in my wife’s house, for sixteen years I envied those who go out at night without saying where they were going, those who pass by with a pretty woman on their arm, those who take trains and go elsewhere…” He never even went to the movies because Mommy thought that was “unrefined entertainment.” Popinga recognizes that “for forty years, I’ve looked at life like a little poor boy with his nose glued to the window of a bakery, watching others eating cake.” When he sees the light, he perceives that what was wrong with his former life was that he was tied down “out of habit.” At last, he feels liberated; he is a free man. “Now, I know the cake goes to those who make the effort to grab it.” People assume he has become abnormal. Rather, he contends he had been abnormal. “No one understands what was ‘before’ was not my normal condition. ‘Before’ if I was thirsty, I didn’t dare say it [and] I politely murmured ‘No, thanks’ if I was hungry.” Step by step, promoted by feelings of “independence” and “superiority” and “being the strongest,” he becomes happy, “soaring thousands of miles above” everybody else.
Simenon explains his protagonist’s ultimate fate in this novel fashion: “There it is! Once again! People had to, no matter what, find another personality in him than his own.” Although having no lawyer and no trial means he is crazy in their eyes, he’s variably indifferent and amused by that conclusion. In fact, when Popinga gets his psychiatrist to start playing chess with him, he thinks the doctor is the crazy one. Before, as a ‘normal’ man, Popinga had responsibilities, but now as a ‘crazy’ man, he has none. Before, he “was always bored” and now, he “was not bored, never.” He’s perfectly content to sleep, then eat, sleep again, and dream. He blows off the people who come to “ask his opinion on everything, on details of no importance.” Discovering “Mommy was more Mommy than ever,” he is delighted to be rid of her. He actually believes he has won out. He felt liberated and happy while roaming about in Paris, but now that he is confined, he feels even more so. No wonder his intended autobiography remains blank: his life is the future and not the past.
So, just what was Popinga’s true identity? Was he a nut? Did he become a nut? Was he always a nut?