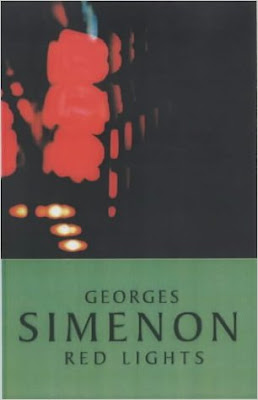 Expecting a road trip novel that portrayed an alcoholic going down the chute hopelessly, I found this was not the case for two reasons:


1) Steve Hogan starts with a single martini after work. When he goes to gas up the car for an upcoming trip with his wife Nancy, he downs a glass of rye (which “he did not like”) because it’s stronger than scotch―the first clue he’s heading for trouble. When he stops on the road because he needs “to go to the bathroom,” he drinks a double martini in two gulps “because his wife would probably not let him stop anymore.” When he does stop again without voicing a reason, he polishes off three ryes in 15 minutes. While he’s in the next bar where it’s a beer plus three ryes, his wife abandons him. Driving deeper into hell, he chugs a half-pint of brandy. After sleeping in the car and being robbed of his wallet, he has enough bills left in his pocket for a bottle of scotch. Swig, swig, gulp, gulp….
If Steve wasn’t totally drunk before, he is now, yet he’s not actually a chronic alcoholic. Indeed, his wife agrees he’s not a “drunk.” (He asks, “Do I drink often?” and she replies, “It’s rare.”) Steve’s just on a drunken bender. “Hadn’t he announced it was his night?” As he tells the interrogating cop, “I’m not a drunk, not even what one calls a drinker.” Thus, the novel doesn’t treat chronic alcoholism as a subject, but it certainly warns about the drug. This is binge drinking, and although it’s one time only, it’s an abuse problem all by itself.
2) Expecting an inevitable dismal ending, I found this was not the case, either. Sort of an automobile movie script, the story starts with the inevitability of Thelma and Louise, drives on a trip through hell, and emerges with the hope of National Lampoon’s Vacation. Although perhaps not as happy as Kees Popinga in the insane asylum watching the trains go by, Steve Hogan gets the chance to achieve a fairly happy life. When Steve finally meets up with “terrified” Nancy, she speaks about “their past happiness” and tells him things will never be the same: she has become 10 years older. She will never be his wife. She expects him to leave her. Believing “she is responsible for what happened to her,” she asks his forgiveness.
But Steve protests, knowing he’s guilty for the damage to her because he ignored her efforts to stop him from going into the bar for a drink. “She, in the end, paid.” First, he confesses he “betrayed” her and asks her forgiveness. “I’m sorry. …I blame myself for my stupidity.” Next, he moves to combat her misconceived guilt and shame plus the difficult life lying ahead for her by arguing, “It’s not yesterday that we were happy.” Standing “naked” in “total sincerity,” he contends they were not at all happy in their “daily routine” and “circle of little habits.” He asks, “Do you understand it’s only today we’re going to begin to live?” and asserts, “There will be another life.” (Steve “intends to never touch another glass of alcohol in his life” and he’s believable.) Seemingly because his greater guilt and shame mollifies her guilt and shame, she accepts: “Perhaps we can try.” So, within this “oasis of peace and silence” they have hope and foresee happiness.