The strange case of Simenon’s ambassador to England 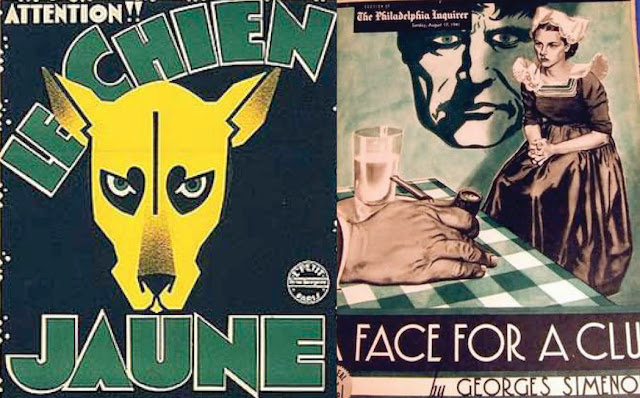 By the late-1930s Simenon was not only established as a bestselling author In France but was also enjoying a certain success in translation in Britain and North America. He now felt ready to negotiate contracts for the remaining thirteen Fayard Maigret novels which had not yet been published in English and in 1939 he signed deals with Routledge and Sons in London and Harcourt Brace in New York. Both publishing houses considered the Maigret stories too short to appear as individual books, so, following a practice established by Simenon’s first British publishers Hurst & Blackett, they appeared in seven volumes grouped in pairs under titles including the name ‘Maigret’ (The Patience of Maigret, Maigret Abroad, Maigret to the Rescue, Maigret Travels South, Maigret Keeps a Rendezvous, Maigret and Monsieur Labbé, Maigret Sits It Out) with the fourteenth text consisting of the 1931 non-Maigret story Le Relais d’Alsace featuring the detective Monsieur Labbé. This foregrounding of the name of the commissaire served a double purpose: on the one hand appealing to readers who had read the eight Maigret stories issued in English between 1932 and 1934, on the other hand, establishing the internal continuity of the series. While, with three exceptions, the translated titles of the individual novels resemble the original French titles in their focus on very specific people or places, the volume titles are much more general, almost to the point of vagueness.
The principal translator, with eight of the fourteen texts, was Geoffrey Sainsbury, with whom Simenon established a close working relationship, going so far as to suggest that the former become ‘Simenon in England’, the author’s ‘ambassador’. The remaining translations were carried out by Margaret Ludwig (four) and Stuart Gilbert (two). In each case, the same translations were used for the British and American editions of each book.
It has been suggested that Sainsbury took Simenon too literally at his word, not hesitating to alter names and other details when he felt necessary to either improve the author’s work or make it more appropriate to an English-speaking readership. This is particularly evident in the first published volume, The Patience of Maigret (1939), consisting of La Tête d’un homme and Le Chien jaune translated as A Battle of Nerves and A Face for a Clue respectively. In both cases, the new title, while it has its origin in Simenon’s text, constitutes a significant change. La Tête d’un homme takes its title from an exchange in Chapter Two between Maigret and juge Coméliau in which the latter complains that Maigret’s actions could lead to a major scandal and the commissaire asks rhetorically whether a man’s head (that of the condemned, in Maigret’s view possibly innocent, Heurtin) is worth a scandal. Le Chien jaune refers to the mysterious yellowish coloured dog that has been observed in the vicinity of a shooting. In Sainsbury’s translations, A Battle of Nerves evokes the opposition of Maigret and the suspect Radek, drawing on a comment by the narrator in Chapter Ten and the Face for a Clue (that of the waitress Emma) refers to an exchange between Maigret and inspecteur Leroy in Chapter Nine where the former explains that his method is to start from the ambiance of a place and his first impressions of people and only then consider material clues.
Sainsbury submitted his changes (including, presumably the change of the name of Crosby in La Tête d’un homme to Kirby in A Battle of Nerves, and major changes to some of the chapter titles – ‘L’auberge de Nandy’ becoming ‘Caviar Again’, ‘Le petit bonhomme’ translating as ‘A Family in Trouble’, ‘Le placard à surprise’ appearing as ‘Maigret Becomes Talkative’) to Simenon before publication, but whether because the author  spoke no English or because, with his distaste for revision, he paid little attention, the translator’s “recreations” passed into print. Whatever the reason, it would not be until 1952, by which time Simenon had acquired a degree of competence in English and was, moreover, married to the bilingual Denyse, that the author would part ways definitively with his ‘ambassador’ in England.
With the passage of more than seventy years, the enduring popularity of Simenon’s work and the superseding of Sainsbury’s translations, it is easy to deride the latter for his presumption that he was in effect the former’s co-author rather than simply a translator. Nevertheless, Sainsbury was addressing serious questions about the nature of literary translation. His translation of La Guinguette à deux sous as Guinguette by the Seine is a case in point: on the one hand, he kept the word guinguette, for an establishment that was culture-specific to contemporary France (the notions of  a ‘bar’ or a ‘tavern’, words employed by subsequent translators being somewhat different), on the other hand, he replaced ‘à deux sous’ with its connotation of ‘cheap and cheerful’ by a geographical reference, since while French readers would automatically associate the word ‘guinguette’ with the Seine and the outskirts of Paris, this would not be the case for a British or American public. Sainsbury was not alone among the translators of the Fayard Maigrets in recognising the importance of such cultural references in the novels’ titles, as can be seen in Margaret Ludwig’s translation of Au Rendez-vous des Terre-Neuvas as The Sailors’ Rendezvous: while the French public would be familiar with the importance to the French fishing industry, and the port of Fécamp in particular, of the seas off Newfoundland (la Terre-Neuve), the Grand Banks were of less significance to British commercial fishing and the geographical reference might not automatically be associated with sailors in the minds of her targeted readership.
In summary, the titles of the Routledge and Harcourt Brace translations of the Fayard Maigrets demonstrate the range of considerations involved in literary translation from both commercial and linguistic perspectives and the challenges facing translators in remaining faithful to an original text while making it accessible to a new readership.