SIMENON SIMENON. THE BEST NOVEL TO SAMPLE THE AUTHOR?

On a particular “Maigret” to contemplate among all the possible choices 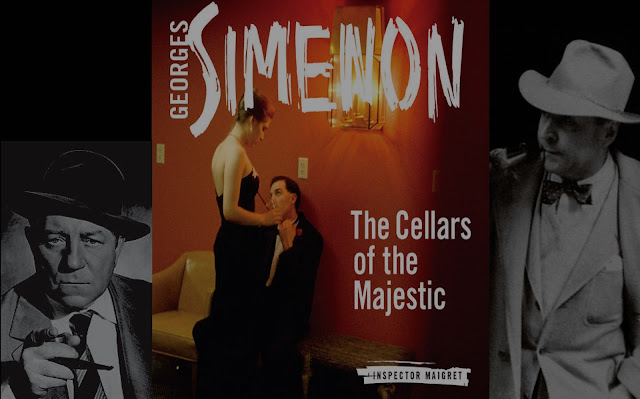 A top American high school lists a single fictional work by each of 296 multi-national authors to aid students in satisfying their summer reading requirements. Simenon makes the cut and the suggested work happens to be a Maigret, The Cellars of the Majestic. This ‘surprise’ (googling did not reveal support for it as one of Simenon’s best works) triggered rereading the novel to identify what led to this pick.
Some observations follow: first of all, the opening pages nicely set up a mystery that is sustained right to the end. In his usual fashion, Maigret pecks away at the dilemma with a mixture of sleuthing and intuition. Three familiar associates (Inspectors Lucas, Janvier, and Torrence) tail suspects and gather evidence dutifully while Maigret duels and outwits a new boss with gusto (the adversary this time being a certain Bonneau). The prose is simple and taut, sometimes telegraphic. Short visual descriptions interrupt and counterbalance long audible dialogues. The setting of a huge luxury hotel provides Simenon opportunities for human interaction and social commentary. “Swarming” with people, it’s like a ”beehive” of two classes, guests (queens) and employees (worker bees), the sort of place where Maigret usually feels uncomfortable. “Maigret, plebeian down to the bone, into his marrow, was feeling hostile to everything surrounding him here.” The novel’s characters are odd and colorful but real. There are multiple suspects, victims, and witnesses, most with hidden agendas. The plot is complex and convoluted but well constructed. In a range from a single flat tire to double murder, one encounters dissimulation, lying, impersonation, forgery, blackmail, money laundering, drug addiction, prostitution, and illegitimacy. The Chief Inspector’s method (or lack thereof) mimics his other cases: without seeming to investigate, he wanders about in the hotel’s cellars, within glass walls like “an aquarium,” stopping here and there as if in “an oceanographic museum.” Indeed, the primary suspect “had the look, literally, of a big red fish in a bowl” whose “face bumps into the glass” with “bewildered round eyes” because Maigret doesn’t ask him any questions. Instead, Maigret chooses the novelty of interrogating him as they ride bikes, side by side, on his way home from work. The Chief Inspector is his usual tough self, even taking a punch on the chin and, later on, delivering one of his own on a nose. Yet Simenon does not forget to display Maigret’s customary humanity and sympathy, even to the point of having him openly but atypically announce, “I have a lot of sympathy for… …the best man on earth.”
In sum, The Cellars of the Majestic offers a challenging yet captivating story, developing intricately but concluding logically. In the end, the Mender of Destinies deals life imprisonment to a double murderer, restores a long-lost son to a pining father, and slips a necessary packet of cocaine to a hopeless drug addict.
If not the best Maigret or the best Simenon, it is pretty much classic Maigret and Simenon, beginning to end. That it is a good novel, a good mystery, a good Maigret (I’ve read them all), and a good Simenon makes it a good choice for anyone seeking to sample the famous author and his most famous protagonist.