SIMENON SIMENON. A HOMELESS PERSON IN “THE MOUSE” 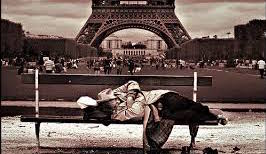 Simenon reported feeling a “real temptation” when he was sixteen years old “to end up homeless.” He updated this when he was 65 in stating, “I am not far from considering the homeless state as an ideal,” explaining that “the true homeless person is a more complete man” and “the homeless person is the man who lives without any compromise and can live in truth with himself.” Affirming that he was familiar with three men “who were homeless by inclination,” he pointed out that “the homeless person is not always a man of low status.” Since these observations came out Simenon’s mouth in 1968, it is interesting to go back 30 years to 1938 and take a look at the homeless man that came off his typewriter as the main character in the novel he entitled The Mouse (Monsieur La Souris).
Ugo Mosselbach spent the first part of his adult life as a “singer, then an organist, then a professor of music and music theory” living a village in Alsace. When interrogated about what “changed the mind” of someone who “had truly been of value” to chose to live homeless in Paris, 'The Mouse' quipped “with false modesty and a tingle of pride” that it was “above all, women!” This sort of response typifies the little fellow one finds is a very happy guy, free of responsibilities, having fun in life, no strings attached. Despite his rags, he looks like “a nice kid,” and his good manners, dignity, and humanity make him very likeable. Moreover, he is intelligent: picking up a wallet loaded with cash beside a dead man, he cleverly schemes a way to make it his property over time. The money will provide the patient dreamer “refuge for his old age” along with a supportive nest egg although he realizes he risks being accused of murder and theft.
'The Mouse' uses deliberate “play-acting” to his advantage time and time again. With “the pirouettes of an acclaimed actor,” he jokes to draw attention and achieve his goals. For instance, he limps constantly, dragging his left foot, gaining sympathy to help collect handouts as a beggar. In particular, he pulls out “all his old tricks” to exploit the police. “On a first name basis” with the cops, he maintains a bizarre friendship that “without a domicile or money” routinely gains him a bed in various police stations throughout the district.
With Simenon adding even more interesting twists to the already convoluted plot, the homeless man “who had never possessed anything” suddenly turns into “a greedy soul” struggling to “protect” his dream cottage. When the police put 'The Mouse' out as live bait, he’s kidnapped. After an exciting failed car chase, he gets beaten up and…. Somehow, he “had to save his skin,” and he does luck out.
Unfortunately, the dead man’s “little son” gets all the money and all 'The Mouse' gets is a three-month jail sentence. But, fortunately after a few weeks of pre-trial detention, he earns the mercy of the court and emerges to live homeless again. Although 'The Mouse' never fulfills this particular dream, he is ever the dreamer with his eye still on his “cottage” and he accepts his fate. In sum, this novel is a light, happy story from an author who more often gives us some heavy, depressing stuff.