About a novel that displays a multi-faceted Maigret. 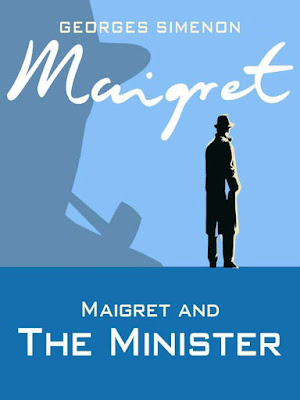 Rereading the notably biographical novel Maigret and the Minister (Maigret chez le ministre) in anticipation of the new Penguin translation pleasantly recalled my personal adventure of some years ago in writing and publishing a Maigret pastiche, Doctor Maigret (Le Docteur Maigret).
Fairly early on the way to completing the Maigret series, the oddity of a policeman who studied medicine caught my doctor’s eye. In fact, Maigret went to medical school for a few years before he dropped out and took up police work. But he still continued to feed his interest in medicine all through his career and into retirement. For instance, he subscribed to a medical journal, he read medical textbooks, and he discussed medical matters with his best friend, Doctor Pardon, during their monthly Dinners for Docs. In addition, Maigret utilized his knowledge of medicine, especially that of human psychology and psychiatry, in his police casework. Maigret and the Minister demonstrates this clearly as Simenon confronts the doctor-detective with multiple challenging personalities in both victims and perpetrators.
For instance, although asked as Chief Inspector Maigret to deal with the scandal threatening Minister Point, “without doubt, Maigret had already felt this way in the course of his career, but never, it seemed to him, with the same intensity: […] Maigret was truly feeling like a doctor called in on an emergency and the patient had put his fate in his hands.” And, as Maigret gathers information from the anxious man, who looked as though “he was waiting for his diagnosis,” the detective recalls how, as a youngster, his parents “had the ambition to make a doctor of him.” This consulting physician’s approach continues on as “Maigret now took charge and his questions resembled those of a doctor seeking to establish a diagnosis.”
While drawing details from Point, Maigret notices that the minister “was already less dejected, like a sick man knowing the doctor would end up giving him a remedy.” So, as Maigret moves on in the investigation, he continually applies his knowledge of psychology and psychiatry in understanding the involved players. Indeed, it is Maigret’s sympathetic appreciation of the Point family’s mental turmoil that sustains him in his step-by-step struggle to find a solution. The psychologist in him deduces why the loner Piquemal’s acts as “the righter of wrongs.” By comprehending “certain traits of his character,” he identifies the mastermind Mascoulin. And, with a similar technique, he tracks down the sly thief Benoit.
Yet, with the Points seeking his opinion on how they should behave, Maigret feels “a responsibility” that “he could not take on.” Threatened by “the dramatic atmosphere that surrounded him,” Maigret turns all cop. Since he has “happened onto a terrain where I feel more at ease,” he is now “sure of himself” and he declares, “it’s my trade.” As he concludes the case through his familiar dogged detective work, he is obviously more comfortable dealing with crooks and crime than politicians and politics. By the end, a pensive Chief Inspector Maigret saves Minister Point’s reputation by working as a doctor and a detective simultaneously.