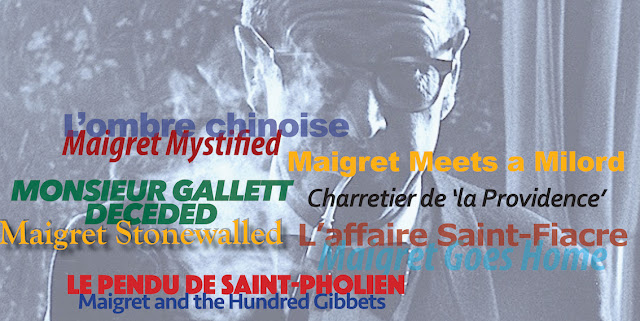 In 1935, Penguin Books was founded in London by Allen Lane with the objective of purchasing rights from other publishers in order to republish “quality” literature in paperback format at a price accessible to a wide readership. Penguin’s first Maigret titles appeared in the United States in 1945 with the reissue of Maigret Travels South (Liberty Bar and The Madman of Bergerac) and in Britain in 1950 with a single volume containing A Battle of Nerves and At the Gai-Moulin. Rights had been published from Harcourt Brace and Routledge respectively and the titles were those of the Geoffrey Sainsbury translations of 1939 and 1940. Over the next seven decades, Penguin would become the most prolific publisher of Simenon’s Maigret stories in English translation, moving over the years from the republication of existing translations to the commissioning of new translations often under new titles.
In 1954, Simenon signed an agreement with Hamish Hamilton for publication of his work in Britain and Maigret au ‘Picratt’s (1951) and Maigret se trompe (1953) appeared in a single volume in 1954 as Maigret in Montmartre and Maigret’s Mistake, republished in separate editions by Penguin in 1958. The success from 1960 of a series of adaptations for British television of Maigret stories encouraged Penguin to publish further novels from Hamish Hamilton’s catalogue of post-1954 novels, but it was not until 1963 that Penguin took the step of commissioning new translations of a selection of Maigrets from the Fayard period: Maigret and the Enigmatic Lett (Pietr-le-Letton), Maigret Meets a Milord, (Le Charretier de la ‘Providence’), Maigret Stonewalled (Monsieur Gallet, décédé), Maigret and the Hundred Gibbets (Le Pendu de Saint-Pholien), Maigret at the Crossroads (La Nuit du Carrefour), Maigret Mystified (L’Ombre chinoise) and Maigret Goes Home (L’Affaire Saint-Fiacre).
The titles of the new editions represented a major development for the English-language translation of Simenon. The Presses de la Cité Maigrets from Hamish Hamilton’s catalogue had generally been given titles close to the French original, the exceptions being Maigret and the Burglar’s Wife (Maigret et la Grande Perche) and Maigret in Montmartre (Maigret au ‘Picratt’s’): in the former case, the word ‘perche’ (a tall pole) may have been perceived as problematic, although the English figurative expression ‘beanpole’ describes very exactly the idea of a tall, thin person, and this translation would keep the original title’s description of Ernestine Jussiaume’s physical appearance rather than her marital situation; in the latter title, the focus is shifted from the name of a specific nightclub (meaningless presumably to anglophone readers) to that of a district of Paris whose reputation for nightlife might be known. Some of the new translations would take this process of creative recreation still further.
The inclusion of Maigret’s name in each of the titles could be justified in both literary and commercial terms. All of the Maigret stories published after 1945 included the commissaire’s name and the recent success of the television series had helped create the sense of a brand name in the consciousness of the British pubic; indeed, most of the 1960-1967 Penguin cover designs included a photographic image from the BBC television series. However, with the exception of Maigret and the Enigmatic Lett and Maigret at the Crossroads, the titles are virtually unrecognisable from those of the original Simenon texts with Le Charretier de ‘la Providence’ becoming Maigret Meets a Milord, Monsieur Gallet, décédé translated as Maigret Stonewalled, Le Pendu de Saint-Pholien appearing as Maigret and the Hundred Gibbets, L’Ombre chinoise transformed into Maigret Mystified and L’Affaire Saint-Fiacre rendered as Maigret Goes Home.
The “milord” whom Maigret meets is Sir Walter Lampson, the husband of the first murder victim, and while their encounters present an interesting, and sometimes amusing culture clash, his presence in the title fundamentally changes its orientation from the carter Jean and the ambiance of canal life. Similarly, the focus on Monsieur Gallet is removed by the change of title to Maigret Stonewalled, it only becoming apparent in Chapter Six that the translator is engaging in a play on words with the stone wall which surrounds the chateau of Tiburce Saint-Hilaire being a symbol of the obstacles that Maigret encounters in his inquiry, to be “stonewalled” being a figurative expression meaning to be obstructed. The Hundred Gibbets are those of the repeated obsessive sketches made by Jef Lombard, a member of the group of former friends whom Maigret is investigating and although the discovery of the sketches provides Maigret with a clue in Chapter Six, it is far from being the defining element of story in either narrative or atmospheric terms. Although it bears no lexical resemblance to the original title, Maigret Goes Home effectively establishes the context of L’Affaire Saint-Fiacre as the first Fayard Maigret in which the commissaire’s familial, social and geographical origins are filled out. The translation of L’Ombre chinoise as Maigret Mystified is the most curious of the Penguin titles, as the case is no more mystifying than any other and, unlike Maigret Stonewalled or Maigret and the Hundred Gibbets, there is no textual hook from which the new title hangs.
The following half-century saw further Penguin reissues, often responding to the perceived commercial opportunities offered by television productions of Maigret stories (ITV’s composite drama Maigret in 1988 and the same companies series starring Michael Gambon in 1992). For the Fayard novels, the publishers used the same translations as before, although Maigret Goes Home was retitled Maigret on Home Ground, the title used for the television film.
Just as Allen Lane’s initial idea of Penguin as an imprint that could bring quality literature to a wider reading public had revolutionised British publishing between 1935 and 1950, so the company’s realisation of the commercial possibilities opened up by the televised series of adaptations of the Maigret novels would introduce Simenon’s detective to an even wider audience of English-speaking readers.